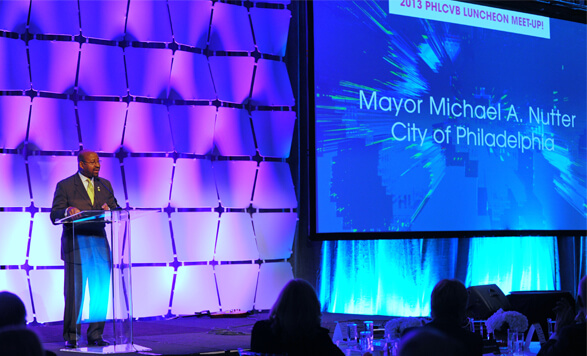 And I’d like to give a special thank you to all the elected officials in the room, the businesses who partner with the Convention & Visitors Bureau who represent our hospitality industry, and the entire team at PHLCVB.

2013 has been quite a year: from several large, high-profile conventions including “Green Build” which just wrapped up, to the recently concluded World Travel Market in London where I joined the PHLCVB team to promote Philadelphia in dozens of interviews with global media.

You might have seen photos of our delegation and I in those cool PHL cabs in London, which are still on the road as we speak. It was pretty exciting to step out on the street and see one drive by.

It was a year ago at this luncheon that I spoke to you by video to convey my congratulations on PHLCVB’s Global Messaging Project, created to help answer the question: “why choose Philadelphia?”

Since that time, many of you have become brand ambassadors for Philadelphia, using the key messages that came out of that project to promote our city, as well as the new visual identifier –“PHL”.

On the screen at the back of the room you will see messages from many of you here today, who help to spread the PHL story – the story of a friendly, diverse, vibrant, welcoming city – the City of Brotherly Love.

As Mayor, I am proud to be a PHL storyteller (I wear my PHL lapel pin every day), and I urge each of you to continue communicating this consistent image of Philadelphia to the world to attract meetings and tourism, of course, but also for business attraction, student recruitment, talent acquisition and simply for civic pride.

According to the US Travel Association, every 33 overseas visitors create one new American job. This fact is part of the reason I traveled to London and Tel Aviv earlier this month: to attract business and tourism from those markets and many others around the world.

With the announcement just this morning that the settlement agreement has been approved by the court, the merger of US Airways and American Airlines (which I strongly supported) will close on December 9th and we can expect even more businesses and international travelers to the region.

International tourism plays a vital role in our future development as a city and region; and more broadly, the hospitality & tourism sector is critical to our success and growth, generating jobs and fueling our economy.

It is so clear to me, after travelling to Tel Aviv, London, and participating in the World Travel Market, that the City of Philadelphia, our government, must increase our own City funding in order to support the marketing & promotion of our city and region across America and around the world.

Make no mistake, our economy is regional. When we talk about Philadelphia, we’re talking about a region of 6 million hard-working, creative people.

From the city’s neighborhoods to the Pennsylvania suburbs, to south Jersey to northern Delaware, we are one region, one economy – the Philadelphia region. We are PHL and we mean business… history, arts, culture, sports and world class amenities.

When people visit Philadelphia to see the Betsy Ross House, the President’s House, and Independence Hall, it’s because they want to witness history… they want to see where the Declaration of Independence was signed and the Constitution was crafted and signed. The only place in the world to see that is right here.

And chances are good those same folks will want to take the time to visit places like Valley Forge, the Brandywine battle field, and Washington’s Crossing historic park – all historic sites in the five county region.

Or maybe they want to visit our historic sites during the 4th of July weekend, enjoy the festivities on the Parkway, and then spend a week down the shore – the only place to do that is, again, right here.

Or maybe they want to attend a spectacular sporting event and cheer for one of the many professional sports teams we have here: the Eagles, Sixers, Flyers, Phillies and the Union – all great teams and organizations.

When we, the City of Philadelphia, partner with Bucks, Chester, Montgomery, and Delaware counties and our friends in South Jersey and Delaware, to promote the Philadelphia region together, our message is stronger and has greater impact.

There are many organizations represented in this room that are already working together, promoting this unified message.

For example: In 2009, PHLCVB, in partnership with the Greater Philadelphia Chamber of Commerce, launched the “Bring it Home!” campaign, which encourages local decision-makers to host meetings in Philadelphia.

PHLCVB also works with the City work together to bring convention business to Philadelphia. The conventions industry is one of the major components of our local hospitality economy, impacting demand for hotel rooms and retail business.

Conventions represented 36 percent of hotel demand in 2012, followed by commercial travelers. We can see from these numbers that by working together, we can create jobs for people all over the region.

Bringing convention business & tourism to Philadelphia is a collaborative effort that depends on many of you here today. I encourage each of you to tap into your networks and relationships with national associations to bring business home to Philadelphia in the coming years.

We know that 2014 through 2016 will be challenging years for the meetings industry, but SMG, the Convention Center’s new facility management firm, has made a commitment that they can bring more business to Philadelphia, and I look forward to seeing them take on this great challenge.

So, I’m eager to work with all of you and the organizations you represent to create a unified convention and tourism message for the City of Philadelphia and the entire region. Let’s get on the same page together. The time has come.

We’re known in almost every other city and in every airport around the world as “PHL”. Let’s embrace what people know about us and expand that, market that, be proud of that. Let’s show our Philly pride more often to more people.

There is only one Philadelphia, so let’s rally around that and share our special city with the world with one message about this one special and great city – PHL to the World.

And finally, since many of us rarely find the time to enjoy our own city in the daily rush of our busy lives, this holiday season I invite you to “Shop PHL”.

Hanukkah begins this evening, and there’s always the excitement of Black Friday, Small Business Saturday, Cyber Monday, and Giving Tuesday: an online to raise funds for charitable non-profits across America.

Come into the city and browse in our stores, stay in our hotels, eat in our amazing restaurants, explore our modern renaissance city, and most importantly: buy local, “PHL Made” products.

Have a safe and Happy Thanksgiving!”