Learn about and honor the histories, cultures, and contributions of Native Americans in the Philadelphia region.

The Lenni-Lenape (or Lenape), meaning the original people, migrated to the Philadelphia region possibly 10,000 years ago, according to oral tradition. Coming from as far north as present-day Canada, the Lenape thrived here, hunting throughout the forests and fishing from the Schuylkill and Delaware rivers.

In 1682, William Penn, a Quaker, arrived in what he would name Philadelphia to claim the land granted to him by the King of England, Charles II. Penn was determined that no one in his province should suffer discrimination or persecution and viewed the Indigenous natives as biblical people living untouched by the corruption of civilization. He learned their language and purchased the first tract of land from them. A treaty was formed at Shackamaxon, what is present day Penn Treaty Park, allowing the Lenape to keep certain villages and locations.

A statue of Tamanend, the Lenape tribal leader who welcomed Philadelphia founder William Penn upon his arrival, is located near the Delaware River waterfront. The chief stands atop a turtle, flanked by an eagle grasping a wampum belt, signifying the treaty agreed upon among Penn, Tamanend, and other Native Americans.

The treaty held until William Penn’s death at which point his son, Thomas Penn, did not recognize the agreement. Deprived of their land, many native groups migrated west, however descendants of the Lenape and those of Cherokee, Navajo, Cree, Seminole, Shawnee, and Iroquois Creek tribes remained in Philadelphia and still reside here today. 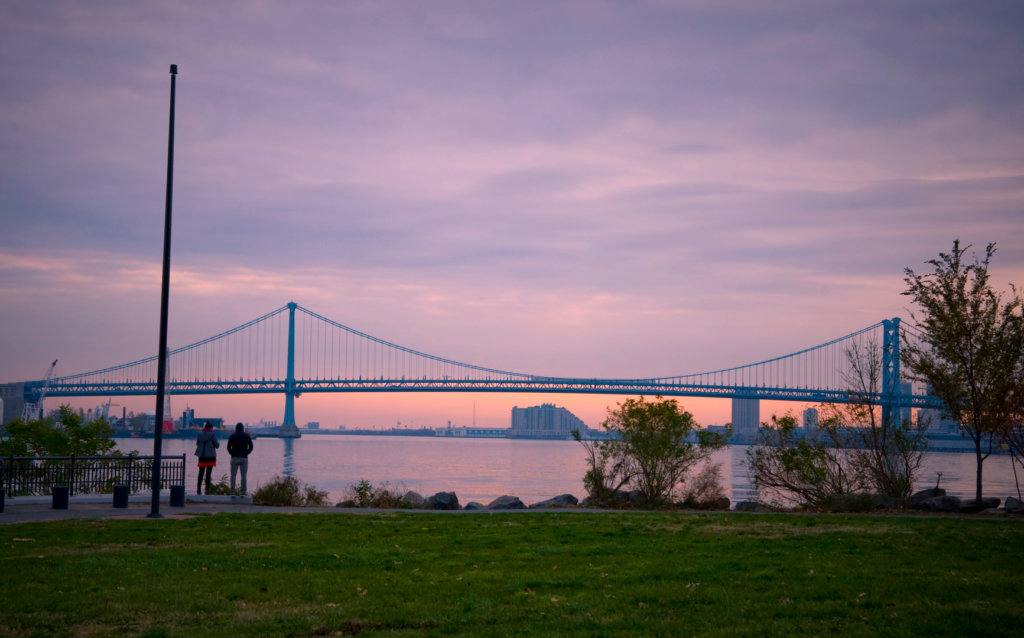 The historic Penn Treaty Park, situated on the Delaware River in Fishtown, includes seven acres of open green space, picnic areas and a playground and hosts community events throughout the year. The park, which boasts a stellar view of the Benjamin Franklin Bridge, was named for the legendary treaty of peace that is said to have taken place here between William Penn and the Leni Lenape Native Americans. Photo by M. Kennedy for Visit Philadelphia

Each year on the second Monday in October, Indigenous Peoples’ Day is observed at Penn Treaty Park to promote the preservation and perpetuation of Indigenous cultures.

Ways to learn about the history of Indigenous people in Philadelphia: 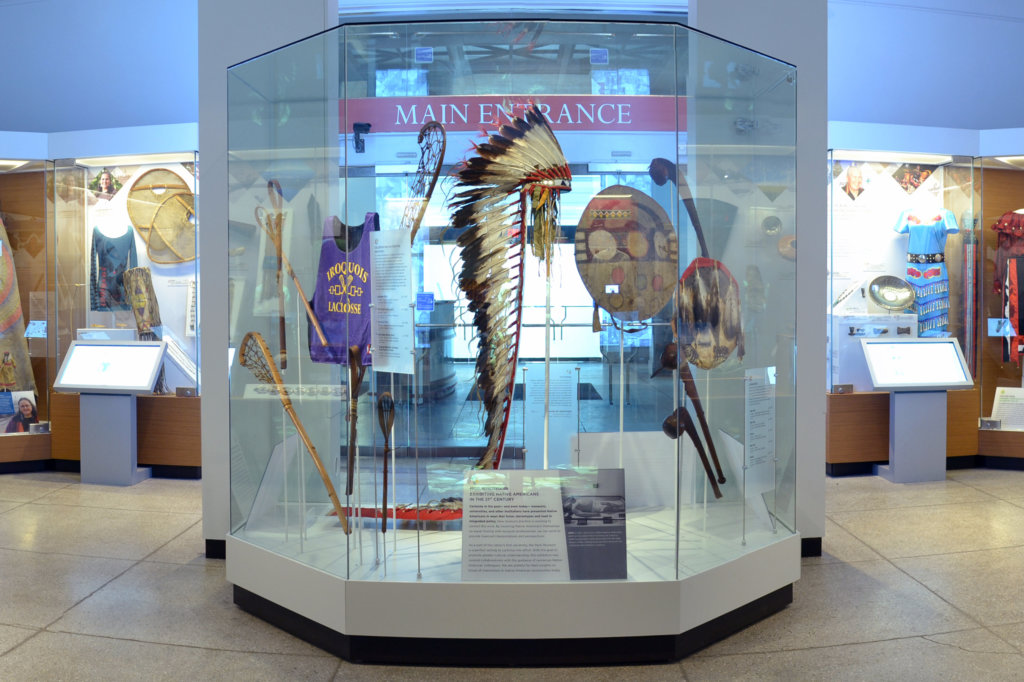 Through artifacts, video and audio recordings and digital interactive opportunities, this exhibition allows visitors to develop a new understanding of the original inhabitants of the land, told through Native American voices. The North American collection includes approximately 120,000 archaeological objects and 40,000 ethnographic objects. 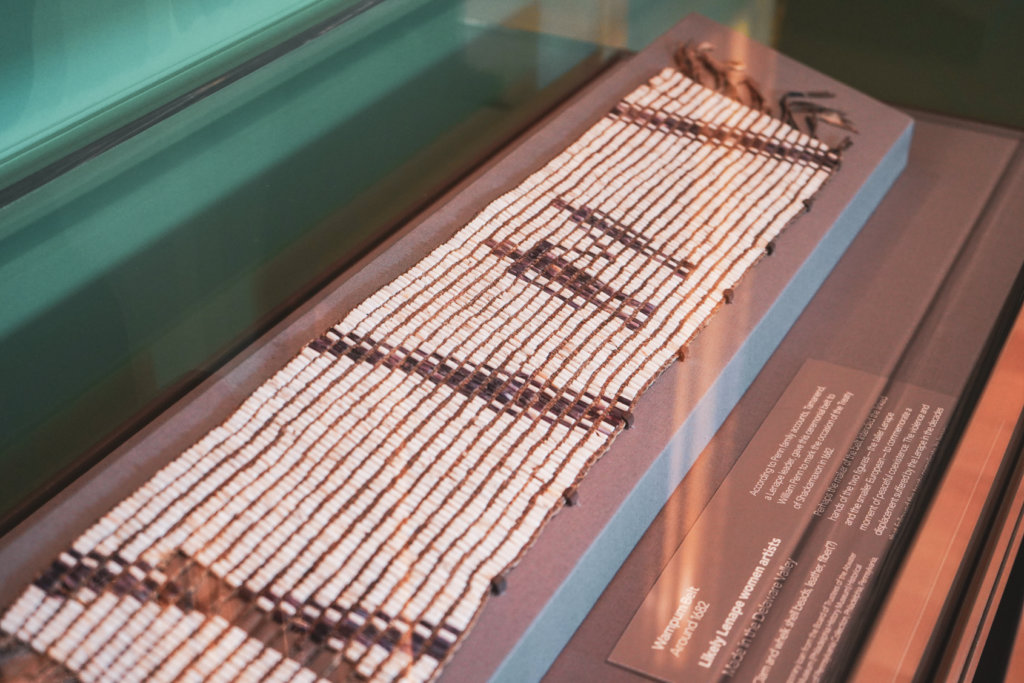 The Wampum belt made from oyster-shell beads and leather that purportedly the Lenni-Lenape gave to William Penn at the signing of the treaty at Shackamaxon, is preserved and on display at the Philadelphia Museum of Art. Photo by K. Huff for PHLCVB.

The New Early American Art Galleries at the Philadelphia Museum of Art place an emphasis on the contributions of individuals and groups that have long been underrepresented in presentations of American art. The installation examines issues related to the encounters between colonists and Indigenous peoples and the role of enslavement in the financing and production of art, while also highlighting lesser-known or overlooked stories of the work of Black, Latinx, Indigenous, and women artists. 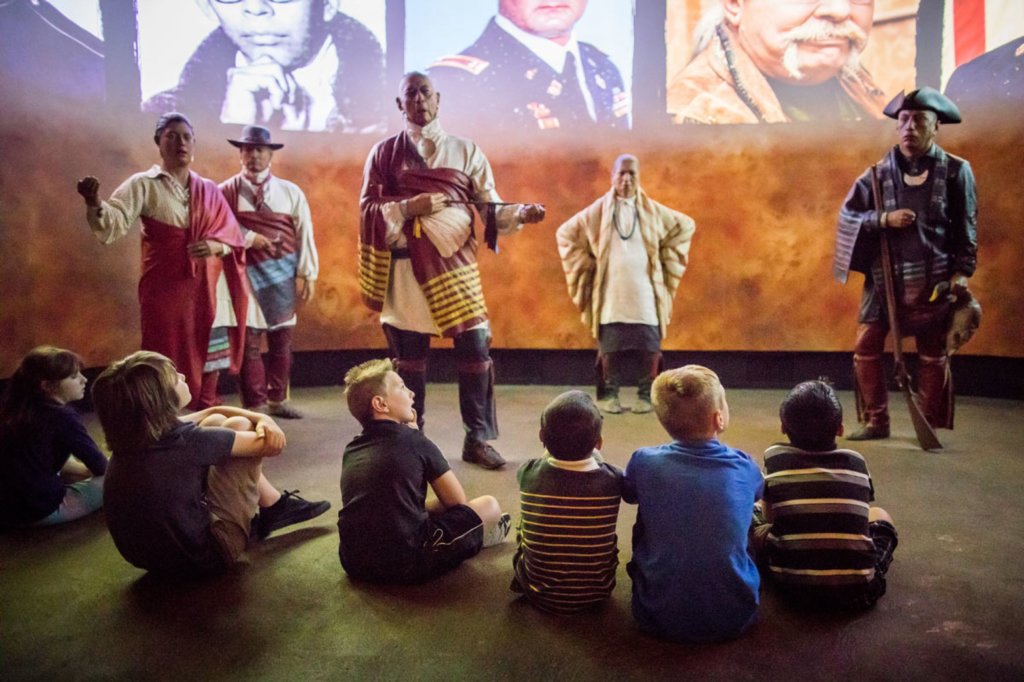 The Museum of the American Revolution dedicates a prominent gallery and atrium to the Oneida Indian Nation, who played an extraordinary role as America’s first ally, fighting alongside the colonists in several key battles and enduring tremendous hardships during America’s war for independence. 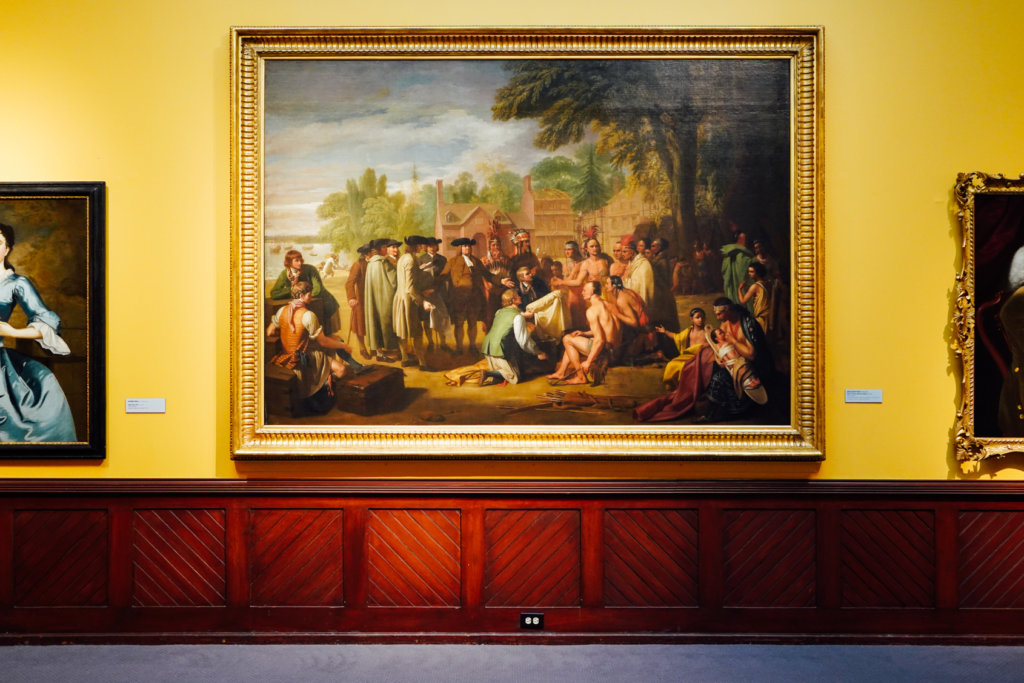 ‘Penn’s Treaty with the Indians’ by Benjamin West, 1771-72, on view at the Pennsylvania Academy of the Fine Arts. Photo by K. Huff for PHLCVB.

On display at the Pennsylvania Academy of the Fine Arts is Penn’s Treaty with the Indians by Benjamin West, 1771-72. One of the artist’s most famous works, the piece depicts Philadelphia’s founder, William Penn, meeting with members of the Lenni-Lenape tribe along the Delaware River. The painting is on display with other Native American works.