Firefighting and fire prevention are tightly woven into the founding of Philadelphia and in the early colonial period in the city. In the late 17th century, Philadelphia founder William Penn set out to create a “greene Country Towne, which will never be burnt and always be wholesome.” Informed by the devastating great London fire of 1666, Penn planned for the city to be built in a grid pattern and mostly with brick buildings to impede the spread of fires and to avoid destructive blazes that other American cities eventually experienced. The five original squares of Philadelphia — Franklin, Washington, Logan, Rittenhouse, and Centre — were also established to aid in preventing the spread of fires between buildings.

Decades later, Founding Father Benjamin Franklin penned an opinion piece in The Pennsylvania Gazette newspaper with his now-famous line, “an Ounce of Prevention is worth a Pound of Cure,” aiming to ignite the idea of forming an organization that would protect Philadelphia from fires. Franklin suggested a “Club or Society of active Men belonging to each Fire Engine; whose Business is to attend all Fires with it whenever they happen.” 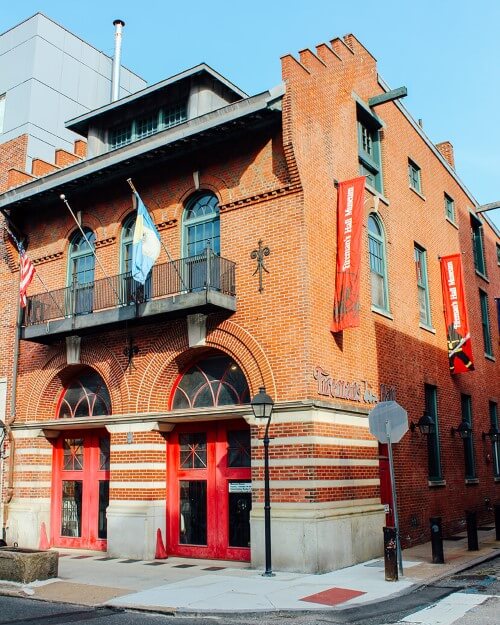 The spirit of community fire-fighting that began in the colonial days of Philadelphia still lives on today all across the United States. TIP: Look for fire insurance marks on buildings in Philadelphia’s Old City – metal plaques that were attached to the front of buildings in the 18th century to alert the fire brigades which houses were insured.

The Head House – the nation’s oldest surviving fire-engine house — was built in 1805 and restored in the early 1960s. The historic building is located between Lombard and Pine streets in Society Hill, just a short walk from the storefronts and restaurants of South Street. The Head House caps the Shambles, which is the nation’s oldest surviving Colonial-era marketplace. Here, 18th-century Philadelphia residents would shop for fresh produce and other goods, something which is still practiced to this day with pop-up farmers’ markets and community events.

Both Fireman’s Hall Museum and the Head House Shambles can be rented for private events.

Top Things to Experience in Philadelphia