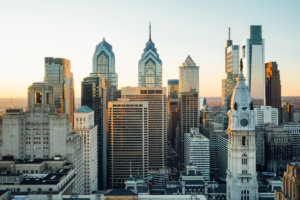 PHILADELPHIA – As Philadelphia hosts the 123rd Army-Navy Game presented by USAA, area residents will have the opportunity to honor and recognize former, current and future men and women of our armed forces and their families for their sacrifices. PHL Sports, a business development division of the Philadelphia Convention and Visitors Bureau (PHLCVB), and its partners give back to the community each year through the PHLCVB Foundation’s Red, White & You Community Outreach Program.

Red, White & You supports legacy projects surrounding the Army-Navy Game, impacting both young people and the men and women of our military. Since its inception in 2003, the program has hosted a total of more than 7,000 students at the game through a partnership with the School District of Philadelphia and Camden’s JROTC Programs. Red, White & You will welcome 350 young people to the game this year and introduce them to the core pillars of service and highlight what makes both the event and the Academies so special.

The Red, White & You program has also partnered for many years with Operation Gratitude, a non-profit organization which focuses on honoring our nation’s military and first responders. This year, that partnership will be in the form of an “Assembly Day” at the Pennsylvania Convention Center on Friday, December 9, where 2,000 care packages for the troops will be assembled by a corps of volunteers. The event is being supported by PHL Sports and the game’s presenting sponsor, USAA.

A partnership between PHL Sports and the Travis Manion Foundation will also welcome a number of Gold Star Families and Wounded Warriors to the Army-Navy Game. Each year, family members of those who have given the ultimate sacrifice while serving our country and wounded military members are given VIP treatment as they attend America’s Game.

“Nothing evokes the spirit of Army-Navy more than serving the military family in these ways and expressing our collective thanks for all the sacrifices made on our behalf,” said Larry Needle, executive director of PHL Sports. “As we proudly say, Army-Navy is America’s Game and Philadelphia’s Honor.”

For more information on Red, White & You, visit DiscoverPHL.com.

PHL Sports, a business development division of the Philadelphia Convention and Visitors Bureau, seeks to attract major sporting events and conventions to the Philadelphia area. PHL Sports, working in conjunction with the City of Philadelphia, the city’s professional teams and universities, has attracted many events to the city and is currently working on bids for future sporting events. To learn more, visit www.DiscoverPHL.com/Sports.