YOUR GUIDE TO THE 2022 ARMY-NAVY GAME PRESENTED BY USAA

Papal Visit, World Meeting Show PHLCVB is Ready for Anything 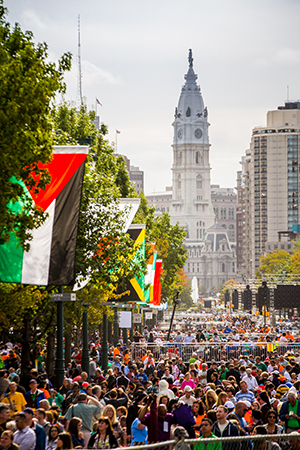 In September 2015, Philadelphia welcomed the eighth World Meeting of Families, which culminated with Pope Francis’ first visit to the United States. The events prompted hundreds of thousands of pilgrims, convention-goers, media, security personnel and others to join us for one of the largest events the city has ever seen.

The week was an unmitigated success on the global stage for the city, the Philadelphia Convention and Visitors Bureau, the Pennsylvania Convention Center and the World Meeting of Families’ organizers who worked in unison with dozens of other local, state, federal, international and private agencies and organizations.

“We didn’t hear ‘no’ in that building as we were going through this process on any level, whether that was from labor or from management or anywhere within the structure,” said Greg Talley, president and CEO of Talley Management Group, which served as lead logistics partner for the World Meeting of Families. “What we heard was ‘what’re you trying to accomplish? Let us give you some other ideas of how that might be possible’ if my idea wasn’t necessarily the best way.”

Philadelphia, the Pennsylvania Convention Center and the PHLCVB demonstrated just how flexible and capable they all were in preparing for and carrying out this historic event. We look forward to an even more successful 2016 Democratic National Convention — and to helping you with your event, meeting or convention, no matter what the size.