There’s A New Chef in Charge

Just five months into his role as Executive Chef of Culinary Services – Pennsylvania Convention Center, Michael Mantia has helped to supervise special events, catering and meals for more than a half-million guests. 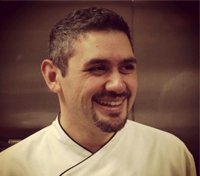 He successfully produced a green menu highlighting local produce for U.S. Greenbuild Association and his team has partnered with celebrity chef Jose Garces to satisfy the delicate palates of Black Tie Gala attendees for the Philadelphia Auto Show. The culinary services for the Philadelphia Flower Show earlier this month received rave reviews from the press, and more importantly, from the Pennsylvania Horticultural Society. “I am in awe of our culinary staff and their ability to put out such great events at such a high volume. I am a believer in providing our team with the tools, logistics and education to successfully turn out events,” Mantia said. “Preparing to feed 230,000 guests each for the public Auto and Flower shows, numerous private receptions for sponsors and surrounding events in 10 days would give just about anyone that butterfly feeling in their stomachs, and we did it successfully.” Mantia trained his whole life for this opportunity. An American born to Sicilian parents, the chef’s culinary training started at his grandmother’s side, where he began rolling meatballs at age 5. His curiosity led him to his grandfather’s garden to cultivate the herbs, greens, vegetables, fruit, instilling a passion for food that gave him a broader sense of the inextricable link between food and family. Mantia’s professional experience shows a successful career of progressive responsibility and achievement. He worked at an airport lounge and catered at a private country club and Lincoln Financial Field. His hard work and enthusiasm earned him invitations to assist with The World Series at Citizen’s Bank Park for the champion Philadelphia Phillies, the Stanley Cup finals for the Philadelphia Flyers and the playoff frenzy surrounding the Philadelphia Eagles. At PCC, where his culinary team works in partnership with facility manager SMG, the chef oversees hundreds of events each year, ranging from single specialty meals for the numerous actors, musicians and politicians who pass through annually to unique receptions, custom buffets and exceptional plated meals for groups that tally their guest count in the thousands. Mantia is defined by his outstanding commitment to exceeding the expectations of the guests he serves and the staff he leads, according to his supervisors with Aramark. “I’ve been in the catering industry since 1989 and have worked with many talented chefs,” said Bernard Carpenter, Director of Sales for Culinary Services at PCC. “Chef Mike Mantia is by far the best! His creativity and presentation is surpassed only by the deliciousness of those creations. He is a dedicated professional who continually raises the bar of excellence.” Mantia said he plans to take the culinary services at PCC to the next level. “There are numerous fine eating establishments in the city, but where can you go with 3,000 of your friends, coworkers and or colleagues and get great food….the Pennsylvania Convention Center.