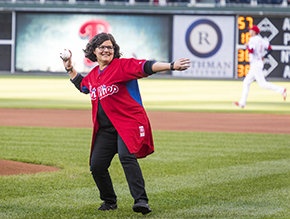 Full of excitement and anxiety, Jen Christensen stepped onto the field of Citizens Bank Park to throw the first pitch at a recent Philadelphia Phillies versus Miami Marlins game. Christensen is the board president of NLGJA — the National Lesbian & Gay Journalists Association.

“I was in Amsterdam with my spouse, celebrating her birthday, when I first got word that I might be able to throw the first pitch,” Christensen said. “It was one of those ‘pinch me’ moments where I had to read the email several times to process the invitation.”

Born and raised in Chicago, Christensen is a die-hard Cubs fan, but always roots for the Phillies when they are not playing her beloved Cubs. Christensen explained that her dual allegiance stems from her family connections in Philadelphia and the history between the two teams. In the 1970s, the Phillies traded and gave Hall of Famer Ryne Sandberg — Christensen’s favorite player of all time — to the Cubs. Sandberg went on to coach the Phillies before resigning last year.

The Phillies’ pitching season has been strong, and Christensen felt the pressure not to let the team down at the mound. Christensen was in Philadelphia looking at potential venues for the 2017 NLGJA national convention. Philadelphia is one of the top three cities being considered. 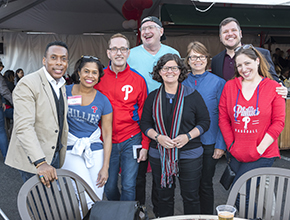 The last time NLGJA held its convention in Philadelphia was in 2011 during Hurricane Irene.

“It was surreal to see on-air anchors stepping outside of the Loews Hotel to cover the storm in between workshops and networking events,” Christensen said. “If we return to Philly, I hope it will only be our keynote speakers and plenary sessions that provide the ‘excitement’ for the convention.”

Annually, the national NLGJA convention brings together over 350 attendees from across the United States for a week of educational sessions and professional networking opportunities. Founded in 1990, NLGJA is an organization of journalists, media professionals, educators and students working within the news industry to foster fair and accurate coverage of LGBT issues.

The NLGJA Philadelphia chapter is coordinating a networking event during the Democratic National Convention in July. 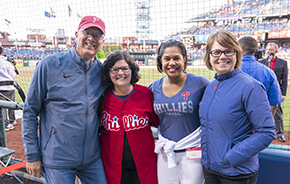 “We are still working out the details, but we are excited to bring members and LGBT media professionals together while they are in town covering the DNC,” chapter President Eric Walter said. “Not everyone can get together at the national convention, so our chapter events are an important way to strengthen existing connections with our colleagues and meet new journalism professionals.”

“We will be deciding on the 2017 convention host city later this year,” Christensen said. “Although our final decision hasn’t been made, the opportunities that the city offers as a destination, the history and progress the city has made in the rights of LGBT citizens, the strength of the Philadelphia chapter leadership and the hard work of the Philadelphia Convention and Visitors Bureau and Visit Philadelphia, I think Philadelphia hit a home run this week.” 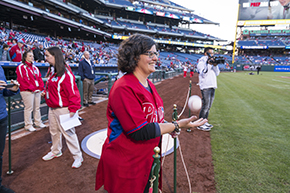