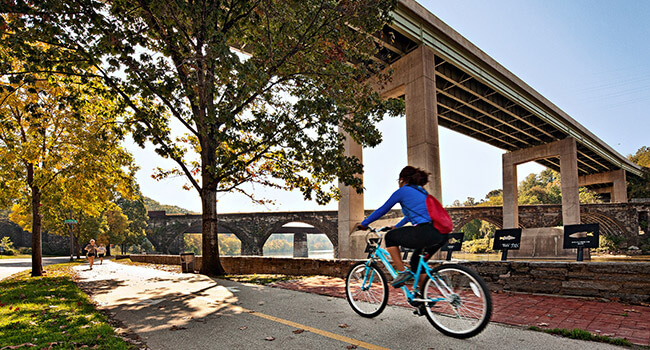 Create your own route or try one of these interest-based options:

Start and end: Philadelphia Museum of Art
Distance: ~4 miles
Take a peek at the Rocky Statue and Washington Monument, and then pick up a bicycle from the Indego Station and head up Martin Luther King Jr. Drive. Continue around the Horticulture Center to gaze upon several statues including The Wrestlers and Edward Stauch’s Night. Throughout the route, you’ll encounter great views of the Schuylkill River, Boathouse Row, The Waterworks and great statues like St. George and the Dragon and the beautiful Smith Memorial Arch. The Association for Public Art has nicely mapped out the ride.
Detailed route map

Start and end: Independence Mall
Distance: ~2 miles
Travel through time along this colonial route. Begin at Independence Mall and check out the Liberty Bell or stroll through the National Constitution Center. Then grab a bike from the Indego station and pedal your way through history starting at The President’s House installation, Independence Hall, Christ Church and the Betsy Ross House. Then dismount and take a quick walk down Elfreth’s Alley, a narrow cobblestone road known as the oldest continually-inhabited residential street in America.
Detailed route map

Start: South Street Bridge
End: Philadelphia Museum of Art
Distance: ~4 miles
Don’t forget your camera because this route is all about the photos. Grab your bike at the University City Indego station and head to the South Street Bridge for an amazing southwestern view of the Philadelphia skyline. Riding this route, you’ll pass the Kimmel Center and Academy of Music, experience City Hall as seen from South Broad, see Love Park, and end with an iconic view of the city from the stairs of the Philadelphia Museum of Art.
Detailed route map

Start: University City
End: Philadelphia Museum of Art
Distance: ~7 miles
Escape city living for a couple hours and spend some time with Mother Nature. Rent an Indego bicycle in University City and start your adventure at the Schuylkill Banks Boardwalk. Enjoy a scenic river view as you head north along Kelly Drive through East Fairmount Park, then switch gears by riding Boxer’s Trail – a wooded area where world champion boxer Joe Frazier trained. Stop for a picnic at the Glendinning Rock Garden before hitting the trail down to the Philadelphia Museum of Art. At times you’ll forget you are in such a large city.
Detailed route map