In 2015, Philadelphia set a then-record 29,279 business partnering meetings at BIO International (BIO). This year, a local coalition led by the Greater Philadelphia Chamber of Commerce will market the convention to 183,000 industry professionals and the 80% of U.S. pharma and biotech companies that have a presence in the Delaware Valley. Also heavily involved in the planning and promotion of the citywide will be PHL Life Sciences, Life Sciences PA, BioNJ and the Delaware Bio Science Association.

A full slate of programming and city immersion activities will be available to attendees, beginning on Sunday, June 1 and running through Thursday, June 6. Influential life sciences leaders will be in attendance – from academic and healthcare fields, legal and service-oriented groups, venture capitalists and investors, as well as representatives from the public sector and major pharmaceutical companies.

Although keynote speakers have not been announced yet, BIO has a history of being a star-studded affair. Last year, Hollywood director Rob Reiner and broadcaster Robin Roberts led keynote discussions. The Pennsylvania Convention Center will be ground zero for countless networking a business partnering opportunities.

During the last several years, the adjacent East Market neighborhood has begun a transformation as new restaurants, shops, and lodging accommodations have created a more desirable downtown corridor for attendees. Another advantage for Philadelphia: accessibility. PHL International Airport has increased airlift to new overseas and domestic markets, making it easier to reach the City of Brotherly Love.

In a $4.8 billion deal for University City-based gene therapy pioneer Spark Therapeutics, Roche pharmaceutical company validated what we all knew: Philadelphia is teeming with life sciences innovation. Financial data aggregator Pitchbook announced it was the ‘largest exit ever within [Philadelphia] limits for a venture-backed company’.

The ripple effect was felt throughout the ecosystem, as local investors and the Children’s Hospital of Philadelphia (CHOP) banked significant returns on the sale. Spark was nurtured at CHOP through the research of leading scientists, including Katherine A. High, MD, who developed a proprietary method for delivering a new treatment for genetic blindness.

In 2017, the company’s chief product, Luxturna, was awarded an approval from the U.S. FDA, a first-of-its-kind gene therapy for a genetic disease. Part of this success story is Philadelphia’s to share, as the city’s historic strengths and leading medical institutions fueled the growth of the company.

Getting a Pulse on the American Heart Association’s ‘Scientific Sessions’

In November (16th-18th) of this year, the American Heart Association (AHA) is bringing its premier cardiovascular conference, Scientific Sessions, to Philadelphia where 16,000 of the world’s foremost leaders in cardiovascular science and healthcare will be in attendance. The Pennsylvania Convention Center will be the scene for groundbreaking research and the latest advancements in 27 different clinical, basic, and population science specialties. It is expected that physicians, researchers, nurses and other cardiology professionals from over 100 countries will participate this year. AHA Chief Executive Officer Nancy Brown will also be celebrating her tenth anniversary as leader of the nationally regarded non-profit organization.

PHL Life Sciences worked closely with the PHLCVB’s senior national accounts director Maria Grasso to raise awareness within our prestigious medical community to submit a winning bid on this strategic convention. In year’s past, the American Heart Association has had a reliable partner in Philadelphia, hosting smaller daylong events at venues like the Science History Institute, which was named one of the city’s ’11 Best Museums’ by Conde Nast Traveler.

As the event gets closer, PHLCVB’s convention services team will spearhead efforts to drive attendance and bring the city’s knowledge capital to the program. Philadelphia is home to many medical “firsts” and research is not only alive and well, but at the forefront of understanding, diagnosing, and treating heart diseases with a concentration of institutions dedicated to scientific discoveries in heart and vascular care.

In October 2018, Philadelphia City Council proposed Pharma Bill 180888, intended help the city’s battle against the opioid crisis. The bill suggested pharmaceutical reps should register with the city, enforcing fines up to $500 per day for those who did not. In addition, copies of all marketing materials would need to be submitted to the City’s Health Department and drug discount coupons would be eliminated. All gifts and meals between reps and healthcare practitioners would be prohibited. The language was inclusive of all pharmaceutical prescription drugs. Many of these components were already law in the Federal Sunshine Act of 2013.

In 2019, PHL Life Sciences-related events will represent more than 225,000 total room nights. Twelve life sciences citywide conventions will bring their business to Philadelphia this year, boosting bottom lines for restaurants, hotels, transportation companies, and other facets of the hospitality industry.

After months of discussion and testimony and inserted amendments and concessions, the bill lacked enough support in a 9-5 vote against it on February 7.

Wrapped in Brotherly Love, the American College of Physicians (ACP) will host 10,000 internists in Philadelphia during the ‘most comprehensive conference in internal medicine’ between April 11 and 13. With more than 200 educational sessions, hands-on clinical skills workshops, and a cameo from Vivek H. Murthy, MD, MBA, the 19th Surgeon General of the United States, the convention will have a little bit of everything.

Sprinkled in will be Philadelphia’s science and medical community, leading the way with topical conversations at the Pennsylvania Convention Center and on-site learning and training opportunities at some of the region’s top medical institutions.

With 154,000 members, ACP is the largest medical-specialty organization and the second largest physician group in the United States. Founded in 1915, they have maintained a headquarters here, in part, because of the city’s history of groundbreaking medical research and high concentration of prestigious teaching facilities.

The Value of a CVB: Bonnie Grant’s Conversation on Life Science Friendly Venues 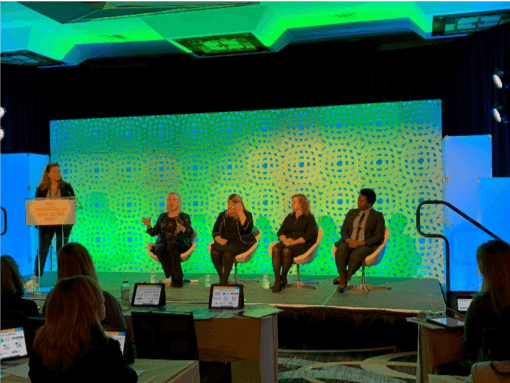 Flanked by sales directors and meeting planners from around the country, Grant reinforced the power of partnering with a local CVB to bring the destination – in this case Philadelphia – into the meeting.

“Sometimes CVBs are overlooked during the planning process, and I want you to know we’re here to ensure success at every level, empowering attendees to get the most out of their experience in the city,” said Grant. “Whether it is finding an off-site location to stimulate a conversation or facilitating an introduction to a local non-profit – like Mural Arts Philadelphia – we will essentially give you the keys to unlock a memorable experience.”

For images from the conference, which was held at the DoubleTree by Hilton, check out this highlight reel. 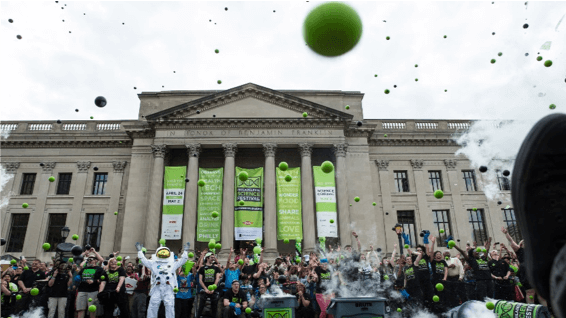 Between April 26 and May 4, the Philadelphia science and technology community will rally in support of an annual tradition – the Philadelphia Science Festival, engineered by the Franklin Institute.

Download knowledge from the city’s life sciences leaders, support local STEM initiatives, and celebrate on the Benjamin Franklin Parkway with a show-stopping Carnival cross-pollinating ideas across various industries and perspectives. More than 160 activities, including volunteer opportunities, will complement and meeting or convention in Philadelphia during this time frame.

A program calendar is still being finalized, but stay glued to the homepage and @PhilaSciFest for more details.

The American Academy of Neurology (AAN) will host its 71st annual meeting at the Pennsylvania Convention Center in downtown Philadelphia from May 4 to May 10.

The convention is expected to bring 14,000 practicing neurologists, researchers, fellows, medical students, patients and providers together for a week of healthy dialogue on the state of the industry. Founded in 1948, AAN supports a dual mission to promote the highest quality patient-centered neurologic care and to improve career satisfaction for professionals in the industry. Advocates on behalf of key legislation and proponents of innovative technological solutions will be on hand, mixing some of Philadelphia’s flavor into the programming.

Additionally, on May 9, AAN is hosting a free public forum designed to engage with the community, especially those who have been affected by brain disease. The Brain Health Fair combines education and action, as presenters share real life examples of patients overcoming traumatic injuries or disabilities. Attendees will learn about the latest research advances in multiple sclerosis, epilepsy, autism, stroke, Alzheimer’s disease, dementia, concussions, and other afflictions. Working with the team at AAN, the PHLCVB was able to secure local speakers, including 6ABC television personality Gray Hall.

Local student groups are also encouraged to attend and participate, as one class will be awarded a $1,000 grant toward the school’s science program.

For the first time ever, the World Drug Safety Congress will bring its commercially-focused event for the pharmacovigilance community to Philadelphia. Between April 15 and 17, featured tracks will cover next generation technology, PV methodologies and patient safety, as well as three new tracks on medical devices, predictive safety, and global pharmacovigilance.

For an exclusive 20% discount, use promo code PHL20 at checkout and save up to $250 on your ticket. Register here.

In a recent Philadelphia Business Journal profile, two female members of the PHL Life Sciences board were named to a list of ‘Power Women’ in bioscience. From researchers-turned-executives to startup founders and venture capitalists, the group’s influence reaches far beyond life sciences and into the entire business community.

Barbara Schilberg, CEO of BioAdvance, has invested $42.8 million in 88 early stage life sciences companies since 2002. Her career of entrepreneurial drug discovery and development created an opportunity to be on the financing side of the equation, maturing a $20 million fund into $50 million.

Heather Steinman, vice president for business development and executive director of technology transfer at The Wistar Institute, oversees a growing pipeline of biomedical discoveries, including small and large molecule therapeutics, diagnostics, vaccines and oncology. Previously, she served as the director of the Penn Center for Innovation, Perelman School of Medicine Office at the University of Pennsylvania.

Both Schilberg and Steinman are coalition builders and champions of the region’s life sciences community, enabling innovation and bringing this conversation to meeting planners who bring their conventions to Philadelphia.

In Case You Missed It