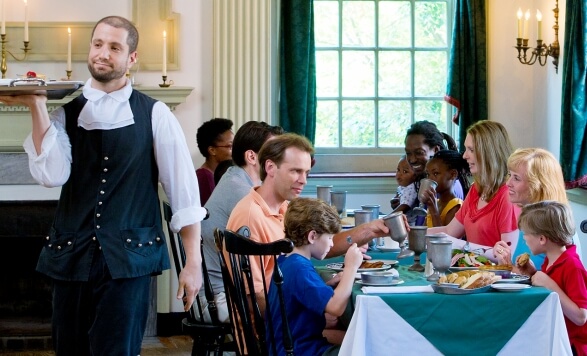 City Tavern, where Thomas Jefferson dropped in for meals while writing the Declaration of Independence.

Philadelphia’s diverse restaurant scene includes a number of dining spots suitable for the younger set yet delicious enough to impress the grown-ups.

To satisfy diverse tastes, head to the READING TERMINAL MARKET. Opened in 1893, it’s one of the nation’s oldest continuously operating farmers’ markets and named the best farmers’ market in the U.S. With a maze of vendors and a bustling energy, the locale is an ideal option for families with wildly diverse appetites, offering everything from Asian and Middle Eastern fare to Pennsylvania Dutch and Philly classics. The market is also home to Dinic’s, whose famed roast pork sandwich was named the Travel Channel’s “Best Sandwich in America.” TIP: The market also offers numerous stands selling baked goods, chocolates, ice cream and other crave-worthy confections, so be sure to save room for dessert.

GET YOUR CHEESESTEAK FIX

Visit the site of America’s original cheesesteak rivalry: the corners of 9th and Passyunk in the Italian Market. Here you’ll find two no-frills walk-up counter spots, PAT’S KING OF STEAKS and GENO’S STEAKS, both claiming to have perfected the cheesesteak. Equally famous is JIM’S STEAKS SOUTH ST., as evidenced by the line of fans waiting outside the Art Deco building for cafeteria style service. PSST: To eat like a local, order “whiz wit,” for a steak topped with Cheez Whiz and fried onions. Don’t let dietary restrictions stop you from enjoying Philadelphia’s signature sandwich; CAMPO’S SINCE 1947 prepares gluten-free and vegan variations of the cheesesteak (as well as hoagies).

Focusing on local, organic and artisanal food and drinks, Farmicia in Old City is a cozy eatery serving food morning to night. The menu features a few decadent burgers, including the brie-stuffed burger with sautéed mushrooms, caramelized onions and Dijon mayo on a Metropolitan Bakery roll, for adults and a cheeseburger with all the fixings on the kid’s menu. Stop by one of the city’s many family-friendly burger joints. SHAKE SHACK has scored legions of fans for its handspun milkshakes and juicy burgers. Located a few blocks from Rittenhouse Square, this fast-casual chain also dishes out hot dogs, fries and chicken sandwiches along with beer and wine for grown-ups.

MAKE IT A LITTLE SWANKY

Just because kids are in tow doesn’t mean you have to skip establishments from Philadelphia’s acclaimed restaurateurs. The menu at JONES, from James Beard Award winner Stephen Starr, focuses on homestyle classics like tomato soup and grilled cheese, sliced beef brisket and fried chicken. An added bonus, the restaurant is within walking distance of Independence Hall and the historic district. Across town in West Philadelphia, Iron Chef Jose Garces’s taqueria, DISTRITO, promises a festive affair for diners, serving modern Mexican small plates and cool cocktails. The eclectic décor is as big a draw as the menu—including a Volkswagen Beetle booth and hundreds of colorful wrestling masks on the wall.

Step back in time at the CITY TAVERN in Old City. Established in 1773, the historic restaurant once welcomed the founding fathers as patrons. Today, under the proprietorship of Chef Walter Staib, the fine-dining eatery prepares authentic 18th-century recipes served by a waitstaff in period dress. Younger diners can order off a special children’s menu featuring meat and cheese pie (a colonial version of lasagna), fish and chips (an English classic) and more.

INDULGE IN A LOCAL TREAT

Order a hometown favorite, crab fries, at CHICKIE’S AND PETE’S, a boisterous sports bar voted Best Sports Bar in North America by ESPN and with an outpost in South Philadelphia. Seasoned with a proprietary blend of spices, the signature side is served with a creamy white cheese sauce and partners well with the bar’s steamed crabs, mussels and lobster pie. After, head to POP’S HOMEMADE WATER ICE for a local dessert: water ice. A smoother style of Italian ice, the chilled treat can be traced back to Italian immigrants like Filippo “Pop” Italiano, who started scooping out water ice from his pushcart in 1932. Today, the walk-up storefront on Oregon Avenue features various flavors of water ice, gelato, soft pretzels and more.