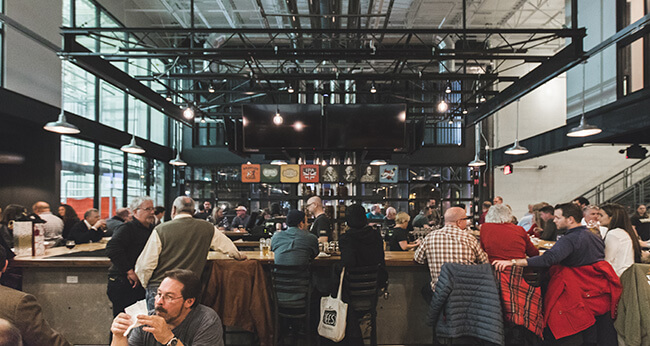 Yard's Brewing — with their historically accurate 'Ales of the Revolution' based on recipes from founding fathers — is one of dozens of successful breweries in Philadelphia.

Philadelphia, called the “Best Beer-Drinking City in America,” has a history that dates back to colonial times when William Penn, the city’s founder, left detailed instructions for the construction of a brewhouse at his estate in Pennsbury, Bucks County.  Breweries and malt houses were popular in the colony, and the city was rapidly growing a national reputation for their suds, with Philadelphia beer drawing favorable comparisons to the time-honored ales of England. In fact, those amber-colored ales helped fuel the American Revolution. By 1793, Philly was making more beer than any other city in the colonies.

Below is a sampling of the many Philadelphia breweries operating within the city limits, along with tour information:

Started in a Manayunk garage by Tom Kehoe in 1994, “Philadelphia’s Brewery” recently moved into a shiny new 70,000-square-foot facility at 500 Spring Garden St. in the bustling Northern Liberties neighborhood. Chef James Burke’s beer-friendly menu pairs well with their approachable ales and lagers, especially their historically accurate Ales of the Revolution — a series of beers made using original colonial recipes from our Founding Fathers.

This retro 1990s-themed brewery opened in 2017 in an old rail-car factory under the Market-Frankford El on Front Street. “The Lab” focuses on pop culture references and features menus wrapped in VHS-tape cases and an old-school Sega Genesis. Adventurous drinkers can sample beers with playful names, like a caramel macchiato porter called New Phone Who Dis?” — and “These Pretzels Are Making Me Thirsty” pretzel lager.

Opened in 2015 and situated next to a reclaimed Gothic-style church in Brewerytown, Crime & Punishment wrote the book on experimental and hazy IPAs. Their rotating “Damka” series, brewed with everything from pink guava to blueberries, along with their juicy flagship Space Race IPA pairs well with the Russian-influenced menu coming out of the kitchen. Try The Grod Inquisitor, a smoked wheat sour — and enjoy the thought-provoking artwork on display, where different local artists visit the brewery every First Friday.

This serene neighborhood brewery set up shop in 2015 inside Fairmount’s Bar Hygge. “Hygge” applies their namesake coziness and conviviality to the brewery, with a well-rounded draft list that runs the gamut from fruit-forward sours and funky saisons to over-the-top barleywines. Their Lemon Meringue IPA is a smooth-sipping crowd favorite.

The first post-Prohibition craft brewery to open in Philadelphia — their original brick and mortar opened in Logan Square, in 1989 — owner Rosemarie Certo has long been a pioneer. Today, they brew eccentric pale ales (try The Walker (brewed with goat brains)) and robust porters (try the medal-winning Man Full of Trouble Porter) and fire up some of the best wood-fired pizzas in the city from the confines of a converted firehouse in Cedar Park.

Since 2016, twin brothers Sean and Andy Arsenault have been making crushable hop-forward ales and Belgian-style saisons in a brick garage on West Passyunk Avenue. Part of the brewery’s charm is the imaginative cartoon sketches that adorn their beer labels, like a mouse double-fisting beers on their Diggable IPA and a drunken bee on their Simpleton Biere De Miel.

Named after the city’s patron saint and housed in the carriage house stables of the now-defunct Theo Finkenauer Brewery in Kensington, Saint Benjamin interprets classic and forgotten beer styles, putting their own creative spin on them. Cult favorites like Junto, an amber-colored coffee kolsch and Pilsner Prosim, a Czech-style pilsner, have earned them local and national accolades. The brewery opened in 2014, followed by their taproom in 2016.

Tours: Saturdays from noon to 4 p.m.

Founded in 2007, Nancy and Bill Barton brew no-frills beers in the 133-year-old Weisbrod & Hess Oriental Building. Philadelphia Brewing has been instrumental in helping to revitalize the Kensington area, as evidenced by their reliable flagship beer: Kenzinger.

Tours: Saturdays from noon to 3 p.m.

Opened in 2017, this brewery/speakeasy lies hidden down an alley in North Philadelphia and doubles down on brewing funky, complex sours while experimenting with wild fermentation. For example, “Soft” starts off as a Belgian Wit and then is blasted with orange zest, coriander and chamomile — it tastes like a beer mimosa.

This newcomer from Chambersburg, Pa., opened their doors in 2017 and immediately won favor with their delightfully wacky barrel-aged sours and unique German-style wheat beers. Roy Pitz Barrel House, with an industrial look built into old truck docks on Spring Garden Street, is a liquid tribute to all things Pennsylvania.

This bi-level brewery in Old City has been part of the beer scene since 2014, encouraging both their brewers and guests to embrace what they are passionate about through their own “second story.” Owner Deb Grady sources hops and barley from her 90-acre farm whenever she can; and their Fritzie’s Lager relies on all-Pennsylvania ingredients.

Founded in 1996, this expansive riverfront mecca on Main Street in Manayunk has earned a stellar reputation for doing a wide array of beer styles. The brewery has survived multiple floods, the most recent was in 2014, due to their proximity to the Schuylkill River. One of their notable brews is French Toast Crunch, a roasty porter and delicious ode to breakfast, loaded with cinnamon and maple syrup.

Tours: Saturdays from noon to 2 p.m. Ask about kayak tours!

Located at Schmidt’s Commons in the backdrop of the old Schmidt’s Brewery, this Northern Liberties brewpub opened in 2017 to much fanfare during Philly Beer Week. Today, they are churning out some of the tastiest beers in town, including a Berliner Weisse made with 300 pounds of red beets and Rye Bread, a rye IPA brewed with caraway seed.

Tours: Upon request, ask a bartender or server.

Inspired by the natural beauty of the Wissahickon Creek, the 5,000-square-foot production brewery and tasting room in East Falls features wooden tables and a mountain lodge feel. The brewery is both dog and family friendly. Check out Devil’s Pool, a double IPA brewed with six different hops, or Kelpius Kave, a Belgian golden ale.

Colonial Pub Crawl that cheers the “spirits” of ’76.  Enjoy traditional drinks and 18th-century history at Colonial and modern-day watering holes as your Colonial guide shares tales of taverns of old.

Daily all-inclusive beer focused tasting and tour experiences including more than 15 different beers, VIP tours at breweries, a beer lunch/dinner tasting, and round trip transportation from downtown Philadelphia. You drink, they drive!

Enjoy a taste of Philly’s finest local beers on this happy hour tour of the unique and historic watering holes throughout Center City Philadelphia, and learn about Philly’s brewing history and today’s most popular brews from your guide.  Several drinks and a snack are included.