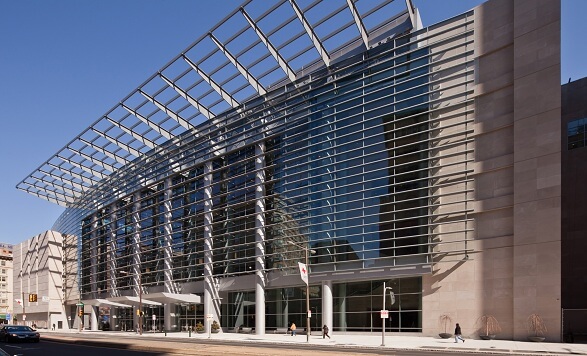 In the Middle of it All

Anchored by the Pennsylvania Convention Center, this bustling district is a go-to for architecture and history buffs and art and food lovers.

The Convention district is home to amazing outdoor art installations, including Claes Oldenburg’s Paint Torch, as well as indoor installations at the Pennsylvania Academy of the Fine Arts, the first art museum and school of fine arts in the country, showcasing a vast collection of 19th- and 20th-century American paintings and sculptures.

A cool modern art exhibition space, The Fabric Workshop and Museum’s unique artist-in-residence program has resulted in an archive of one-of-a kind collaborations with internationally renowned artists such as Roy Lichtenstein and Kara Walker.

Head to Dilworth Park, an urban oasis just outside Philadelphia’s City Hall, with a lush lawn, café and dancing fountains that transforms into an ice-skating rink in winter. For 360-degree views of Philadelphia, visit the observation deck at the base of the William Penn statue that sits atop the building, after a tour of City Hall.

Sample the best in local and global flavors at the Reading Terminal Market. Housed under a converted train station (the Reading Railway of Monopoly fame), this historic building brings local farmers and international food vendors together under one enormous roof. America’s original farmer’s market is home to Tommy DiNic’s Roast Pork Sandwich, which was voted the best in America by the Travel Channel’s Adam Richman.

Philadelphia’s Chinatown is one of the largest in America. Snap a photo under the Friendship Gate, America’s first authentic gate, with bright carvings and red and gold accents – a gift from Philadelphia’s sister city, Tianjin, China. Chinatown offers delicacies from all across Asia. If you’re traveling with a large group, visit Sang Kee Peking Duck House, a Chinatown landmark that serves delicious duck and other delights. For an Asian spin on pub fare, Bar-Ly features an impressive selection of craft beers.