Learn how Philadelphia is working together to introduce new clean and safe guidelines with PHL Health Pledge. 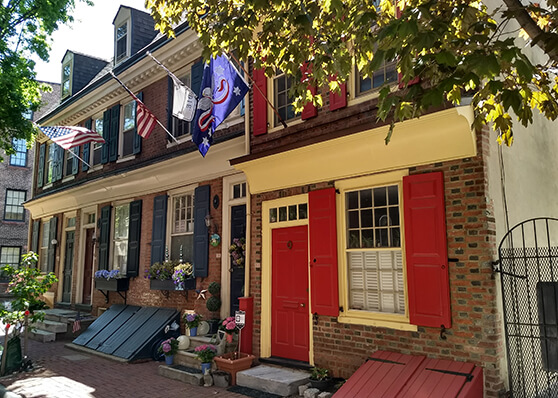 Explore the picturesque streets of Philadelphia's Old City, where history is around every corner! Photo by Robin Bloom for PHLCVB.

With more historic buildings from the colonial and federal periods of American history than anywhere else in the United States, many of Philadelphia’s original structures have been preserved in the Old City and Society Hill neighborhoods. Cast-iron storefronts, art galleries and Belgian block streets create a look and feel of an artist enclave and on the first Friday of the month, “First Friday,” the galleries, studios, shops and restaurants open their doors in Old City for an exhibition of the neighborhood’s vibrant arts scene.

The only museum in the country dedicated to the colonists’ struggle for independence, the Museum of the American Revolution showcases original artwork and artifacts from the period plus interactive exhibits that trace the seeds of the war to its impact today. PSST: On display is George Washington’s actual war tent.

The National Liberty Museum explores the themes of diversity and inclusion, civic engagement and leadership. Highlights include a replica of Nelson Mandela’s jail cell and an exhibit honoring the heroes of 9/11.

Get an in-depth look at historic treasures with a professional tour group. See the sights from a horse-drawn carriage with the 76 Carriage Company or embark on a neighborhood or themed tour with Philly Tour Hub. Philly on Tap beer tour is always a hit. Take a walk on Philadelphia’s dark side with Grim Philly Tours and learn about vampires and ghost hunting!

Mojitos, empanadas, ropa viego and other Cuban favorites are on the menu at Cuba Libre. The restaurant has an open-air vibe that’s modeled after a Havana streetscape.

No visit to Old City would be complete without stopping by The Continental. Local impresario Stephen Starr kicked off his restaurant career by imaginatively spinning an old diner into a martini bar.

Grab a great fresh cup of coffee at Old City Coffee, located in the heart of the historic district.