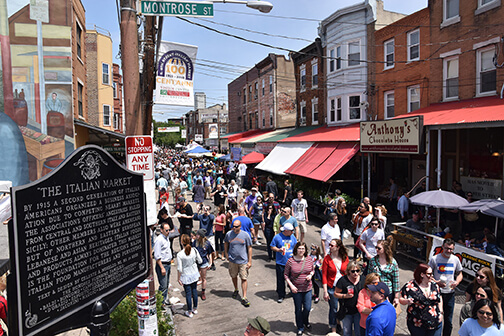 Known for its easy access to major sporting arenas—including Lincoln Financial Field, home of the Super Bowl LII champion Philadelphia Eagles—the area is also a hit thanks to its multicultural and foodie attractions.

Immerse yourself in all things Swedish—art, history, culture and science—at the American Swedish Historical Museum. Check out the exhibit Ingmar Bergman and His Legacy in Fashion and Art, through Jan. 31, 2019, which explores the renowned director’s influence on today’s fashion and art.
Wander through the eclectic South Street Headhouse District to explore the many shops and attractions, including Philadelphia’s Magic Gardens, an immersive outdoor and indoor mosaic installation.

Started by Italian immigrants in the late 1880s, the Italian Market on 9th Street has a mix of vendors selling fresh fish, meat, fruit, cheese, baked goods and vegetables, as well as ethnic eats like Mexican and Middle Eastern.

Book online a behind the-scenes tour of the market with Chef Jacquie’s Taste 4 Travel. PSST: You’ll get to sample a wide range of gourmet cheeses at the stop at Di Bruno Bros. A family owned-and-operated business in the market, Fante’s Kitchen Shop is a treasure trove for cooks, with hard to-find kitchen utensils, cookware and appliances.

For home run entertainment, catch the Philadelphia Phillies in action at Citizens Bank Park. With the city skyline as its backdrop, the ballpark offers great sightlines and plenty of Philadelphia-inspired concessions, from hoagies and cheesesteaks to crab fries. No ticket? No problem. Watch the Phillies and other teams play on a 32-foot HD TV at XFINITY Live! The entertainment complex offers six different venues, including Victory Beer Hall, Broad Street Bullies Pub and NBC Sports Arena.

Excellent Italian eateries abound in South Philadelphia. Head to the red gravy Victor Café where the servers are opera singers and perform every 20 minutes.

The Saloon Restaurant has been serving hearty Italian dishes like eggplant Parmigiano, braciole and veal piccante along with a fine selection of steaks since 1967.

Tucked away in the Navy Yard, Bar Amis prepares handcrafted pastas, stuffed sandwiches and small and large plates in a casual setting.