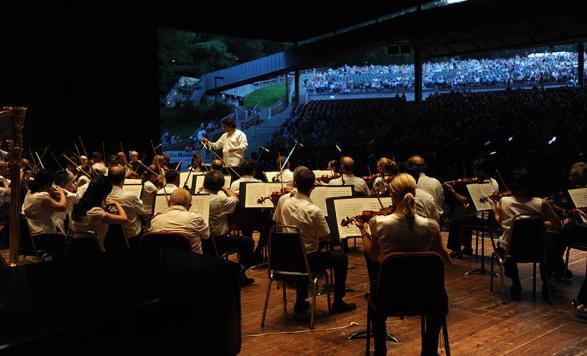 Everything's better under the moon and stars. Check out some of the region's best spots to take it all in.

Where to watch movies, concerts and plays — all al fresco

We want you to spend as much time as you can outside this season. Here are some great (roofless!) venues hosting a slew of entertainment you won’t want to miss.

Penn’s Landing
The Delaware River waterfront plays host to family-fun, nighttime entertainment. Watch a movie on the big screen under the stars at 8:30 p.m. every Thursday night during “Screenings Under the Stars” from July 6 through Aug. 31. (Tip: Be sure to bring a blanket or lawn chair.) Also, every Friday night in August (plus some Saturdays), head to the Great Plaza and enjoy a free concert from the Summer Concert Series — they’ve got something to suit a whole range of musical tastes, including a multicultural series.

Clark Park
Pack a picnic and head to University City for some Shakespeare in the park. The action takes place in the “bowl” of the 9-acre park at Chester Avenue and 43rd Street. Shows usually run from July 27-31 at 7 p.m. Admission is free and productions are about two hours long with no intermission. This summer’s show title is yet to be announced.

Longwood Gardens
The gardens, not only splendidly beautiful, present more than 40 concerts — ticketed and free — over the season, from rock to folk, pop to bluegrass. Check out a ton of shows happening at the park’s open-air theater or by the main fountain garden. Think the Philadelphia Orchestra, Chick Corea Trio, Natalia LaFourcade, the Kennett Symphony and many, many more. A new beer garden also ensures Longwood Gardens will be on the top of your list, featuring live music every Thursday evening from June through September beginning at 6 p.m. More information at Longwood Gardens Events and Performances.

XFINITY Live!
Philadelphia’s dining and entertainment hub at the sports complex has a massive outdoor area whose focal point is a 44-foot Sony LED video board. The giant screen plays ongoing sporting events, concerts and movies the whole family will enjoy. Be sure to explore the 80,000 square foot surrounding entertainment complex before or after the screening.