Home » Visit » Explore Philadelphia » sports-and-outdoors » Off to the Races

Off to the Races 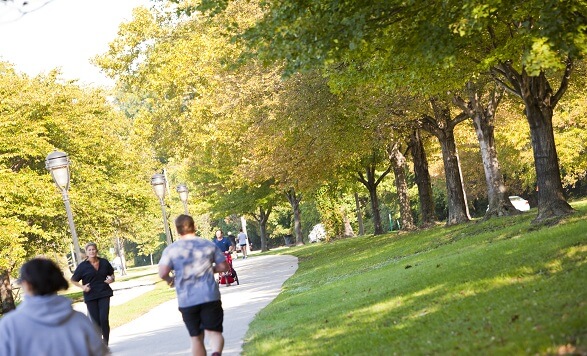 In the country’s oldest collegiate meet – 118 years, to be exact – high school and college track stars dash for the distinction of being the fastest. Cheer them on at historic Franklin Field at the University of Pennsylvania. www.thepennrelays.com

A true Philadelphia tradition, the Broad Street Run is one of the fastest 10-mile runs in the country. The course is a point-to-point race along Broad Street, taking participants through many of Philadelphia’s diverse neighborhoods. Elites and locals compete side-by-side in this exciting road race, as thousands line the course to cheer them on, along with pep bands and local performers. www.broadstreetrun.com/

Competitors swim, bike and run their way through Philadelphia in one of the top ranked multi-sport events in the country. PHLYTRI hosts three days of competition and activities and is a featured race in the Life Time Fitness Triathlon Series Race to the Toyota Cup. www.phillytri.com

Previously known as the Philadelphia Distance Run, the Rock ‘n’ Roll Half Marathon has been the premier half marathon in the country for more than three decades. The race is a test of athletic endurance combined with its own soundtrack. Runners are greeted at every mile marker by bands that provide music as the runners make their way around the city: from Eakins Oval in front of the Philadelphia Museum of Art, through Center City to historic Philadelphia, back across downtown, then up the Schuylkill River Trail to Eakins Oval once again. runrocknroll.competitor.com/philadelphia

Offering a marathon, half marathon, and an 8k run, Philadelphia Marathon Race Weekend has a course for every runner.  Even children can participate in the fun with the short distance Kids’ Run, complete with medals and refreshments for participants. The main event of the weekend features the full marathon, a 26.2 mile race that captures the very essence of Philadelphia along its path, as it winds through every neighborhood. Don’t miss the Health & Fitness Expo, held at the Pennsylvania Convention Center, or the numerous Cheer Zones along the course on Race Day. www.philadelphiamarathon.com