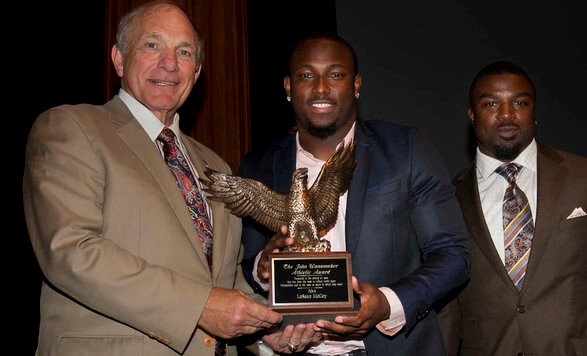 LAST DEC. 8, Merrill Reese looked out from the Lincoln Financial Field radio booth and, amid an unexpected deluge of snow, he could barely see a thing. The players on the field resembled stick figures; the longtime Eagles’ broadcaster called the beginning of the game based on which player lined up in which slot on the field.

“But it cleared a little bit, and, as it cleared, the pace of the game picked up,” Reese told a room of people yesterday at the Wanamaker Building. “There was only one problem. Everybody else was running in slow motion, and this guy was going full throttle.”

Reese, of course, was referring to LeSean McCoy, the Eagles’ star running back, seated only several feet away. Moments later, McCoy, fresh off a record season, was presented this year’s John Wanamaker Athletic Award, awarded annually to “the athlete, team or organization that has done the most to reflect credit upon Philadelphia and to the team or sport in which they excel.”

The award was one of several presented yesterday by the Philadelphia Sports Congress, a division of the Philadelphia Convention & Visitors Bureau, in conjunction with Amerimar/Behringer Harvard in a luncheon and ceremony in the Crystal Tea Room. The Black Women in Sports Foundation was honored with the Robert P. Levy Community Service Award, while its co-founder and president, Tina Sloan Green, was presented with a Lifetime Achievement Award. Ruth Bull, founder of the International Tuzos Philadelphia Soccer Academy, was recognized as the Sports Volunteer of the Year.

“I have so many different things that I’ve accomplished so far, and there’s things that I want to accomplish and this is one of them,” McCoy said on stage. “I look at all the players, man, that have received this award, and just to have my name mentioned with those guys is amazing.”

McCoy, who turns 26 on July 12, last season led the NFL in rushing yards and yards from scrimmage en route to earning his second trip to the Pro Bowl. His signature performance was the one referenced by Reese, when he broke out for 217 rushing yards, an Eagles single-game record, in the 34-20 “Snow Bowl” victory against the Detroit Lions.

The Harrisburg native will enter his sixth NFL season ranked fourth on the Eagles’ all-time rushing list, only 387 yards separating him from Steve Van Buren, who’s in third. Another season like his last would push McCoy well past Wilbert Montgomery, the team’s all-time leading rusher, with 6,538 yards.

“I’ve seen him grow in leaps and bounds, and he was very good his first year,” said former Eagles running back Brian Westbrook, whose final season in Philadelphia was McCoy’s first. McCoy has previously credited Westbrook as a major influence in his career.

“Anytime you get this type of player in the open field with anybody in the league, from up front to linebackers, safeties [to] cornerbacks, he’s going to make a play, he’s going to make them look kind of foolish at the same time,” Westbrook said. “This is exactly the type of offense that he needs to be in.”

McCoy and his teammates are readying for Year 2 under Kelly. When training camp commences July 25, the biggest story line will regard starting quarterback Nick Foles, who’s entering his first season as the clear-cut starter. Through the Eagles’ recent stretch of 10 organized team activities and a 3-day minicamp, McCoy described Foles’ spring performance as “lights out, even in [mini]camp, but he still wants to be at a higher level.”

The changes to the Eagles’ offensive personnel since last season have been well-documented. DeSean Jackson, Jason Avant and Bryce Brown are gone, but Jeremy Maclin is back from injury and veteran Darren Sproles and rookies Jordan Matthews and Josh Huff have joined the fold. McCoy said he’s been impressed with the rookies and said Sproles, his new backfield mate, “has the quickest feet I’ve ever seen.”

However, it appears the Eagles’ high-octane offense will begin the season without its starting right tackle. Lane Johnson, the fourth overall pick in last year’s NFL draft, is expected to miss the first four games after reportedly testing positive for performance-enhancing drug use.

“The thing with Lane, what sucks about that is just how good he did last year as a rookie,” McCoy said. “Your second year is the best year in the NFL that you’ll see the difference [from the first year]. Knowing that he’s going to have a big year, it sucks that he might have to wait four games. So that’s something that we’ve got to wait and see and find out how that turns out.”

McCoy said he’s confident the versatile Allen Barbre, Johnson’s expected replacement on the offensive line, could step in and perform.

“They paid him some money because they knew he can play,” he said. “He definitely can play.”

Ultimately, the Eagles’ most dangerous offensive weapon is eager to hit the field again and see how all the parts fit together. Although he reiterated he still considers himself the best running back in the league, McCoy also said yesterday he believes there are still some plays he left on the field last season. Only 22 days remain before the Eagles again report to the NovaCare Complex for another training camp.

“We’re geared to really take off,” McCoy said. “I think last year we did so well, just winning the division, and this year we can really feed off of that and move in the right direction.”