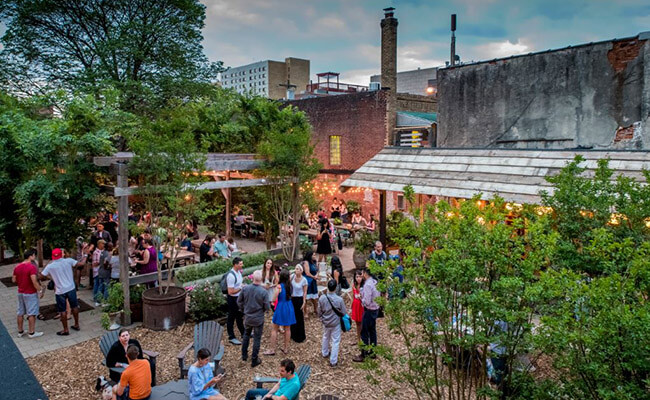 Philadelphia’s love affair with beer goes back to those gritty colonial days when George Washington and Thomas Jefferson were plotting revolution over tankards of ale in Old City. For nearly 250 years, the City of Brotherly Love has looked to frothy suds to quench our thirsts and expand our minds, especially in the summer months. Today’s beer drinkers can still be seen imbibing in Philly’s historic taverns and watering holes. And, when the sun cranks up the heat, fun-seeking Philadelphians take the party outside. There seems to be a new beer garden opening every week, in every available plot of green space from Fishtown to Penn’s Landing, and city dwellers and out-of-towners alike will be flocking to the taps once again in “America’s Best Beer-Drinking City.”

This German-themed concept from award-winning restaurateur Stephen Starr is open year-round for pretzels, bratwursts and one-liter boots of brews. In the spring and summer months, their spacious outdoor beer garden is the place to be and be seen. Thirsty Philadelphians can sit at large picnic tables and get lost in conversation over a spirited game of Jenga or competitive round of ping pong. Frankford Hall’s monthly Nerd Nites — every Wednesday night at 7:30 p.m. — are particularly popular in Fishtown, along with wacky one-off events during Philly Beer Week and the Philadelphia Science Festival.

The lively beer garden from Chef Michael Schulson is open daily with 15 draft beers, including two special collaborations with Philly’s Yards Brewing Company: Yards IBG Saison and Yards IBG Grapefruit Pale Ale. They will also be offering a “For the Table” food menu of shareable comfort foods available to order by the pound such as brisket, pulled pork, turkey, chicken wings and Italian sausage. Organizers promise a host of fun outdoor games, plus an innovative new “AstroTurf” area, scattered around their expansive 20,000 square-foot space overlooking the Liberty Bell and Independence National Historic Park.

Getting ready for their fourth season, Craft Concepts Group transforms the courtyard of the BNY Mellon Building into a bustling oasis in the heart of Center City, perfect for relaxing after a long work day spent staring at a computer screen. Look for a revamped cocktail menu in 2018, along with a brand new custom draft lineup of taps that Uptown’s beer experts both collaborated on and helped brew. Snacks and small plates, like MexiCorn and creative flatbreads, are the norm for this seasonal hideaway.

Enjoy a beer, live music and films under the stars at the Haas Biergarten with views of the Benjamin Franklin Bridge and the Delaware River.

Back for their fifth season, Spruce Street Harbor Park Sustained by Univest remains the brightest gem on Philadelphia’s resurgent waterfront. Run and operated by Delaware River Waterfront Corp, this urban beach — with unparalleled views of a majestic floating garden — will be open through September 30 with myriad fun and interesting surprises planned. Beer aficionados can kick it in a cozy hammock with their favorite local brews while enjoying regional foods, playing oversized games and listening to live music throughout the season.

The mobile beer gardens will be open on Wednesdays and Thursdays from 5 to 10 p.m.; Saturdays from 1 until 11 p.m.; and Sundays from noon until 10 p.m through September in various neighborhoods and programming varies by location.