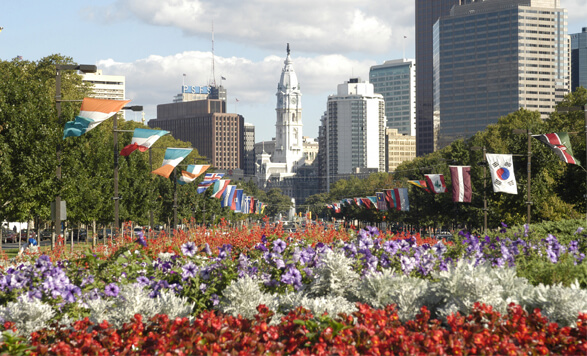 Philadelphia is the nation’s epicenter of horticultural excellence and home to exceptional gardens and parks. This handy map, developed by the Pennsylvania Horticultural Society, guides you through Center City gardens and parks, many of which are managed by PHS in partnership with the city. Begin your tour at one of four historic squares—Logan, Rittenhouse, Washington or Frankin—and see where the path leads! And be sure to take a look at our Historic Homes and Gardens itinerary, as well.

This area of Center City includes many of Philadelphia’s premier cultural attractions, situated along the mile-long, tree-lined Benjamin Franklin Parkway. Anchoring Logan Square at 19th Street are lush, colorful plantings surrounding the Swann Memorial Fountain, featuring a ring of Paulownia tomentosa trees, ornamental grasses, and curved perennial beds that provide a sense of enclosure to enjoy the fountain. PHS worked with the City of Philadelphia and a consortium of Parkway cultural institutions to oversee the 2006 re-design and renovation of the Logan Square plantings.

Across from the Cathedral Basilica of Saints Peter and Paul at 18th and the Parkway, you’ll find Sister Cities Park, a picturesque setting for imaginative play and relaxation, with a visitor center and café offering signature Philadelphia products. Children can enjoy nature in an urban setting, “hike” along a meandering nature path and stream inspired by Philadelphia’s beautiful Wissahickon gorge, launch toy sailboats on a pond and play in a splash fountain.

Walking northwest toward the Philadelphia Museum of Art, enjoy the four-and-a-half acre grounds of the internationally acclaimed Barnes Foundation, described as a “gallery in a garden and a garden in a gallery.” The stunning building, which houses a world-renowned collection of Impressionist, Post-Impressionist, early Modern, and decorative arts, boasts a number of sustainable features, including a green roof and permeable surfaces that allow for rain and grey water re-use. Next door is the Rodin Museum with its lovely interior courtyard garden. PHS and partners completed a rejuvenation of the garden in 2011, adding new hedges, borders, and flowering trees and shrubs. The garden design, by Philadelphia-based OLIN, was inspired by the original garden plans by Jacques Gréber, who conceived the overall design of the Benjamin Franklin Parkway.

The Benjamin Franklin Parkway is crowned at the northwestern end by the city’s largest art museum, the Philadelphia Museum of Art, an impressive neo-classical building with a courtyard garden atop its famous steps. From here, one can take in a sweeping view of the city. PHS worked with the museum and the city to renovate the 25-acre museum grounds beginning in 1996. In addition to the courtyard space at the museum’s east entrance, the site includes richly landscaped ramparts on three sides where walkways are lined with a variety of evergreens and perennials. A sculpture garden and the Sol LeWitt Flower Garden (through 2014) on the building’s west side complete this artful landscape.

Just northwest of the Art Museum, the beloved Azalea Garden explodes with color in the spring and provides beauty all year long. The Azalea Garden was a gift from PHS to the city in 1952, but it suffered from neglect in the ensuing decades. PHS worked with the city and other partners to lead a full-scale renovation of the garden, which is part of the city’s 9,200-acre Fairmount Park system, returning it to its full glory in 1989. Rhododendrons and pieris, as well as a mixture of woody and herbaceous plants, complement the azalea display and create a varied garden with year-round interest. The Azalea Garden now is one of the city’s most picturesque public sites for wedding photography and serves as a favorite picnic spot, as well as a gateway to the popular recreational trails on both sides of the Schuylkill River.

Before approaching the Art Museum, you may also head south along 25th Street to reach Schuylkill Banks, a linear park and recreational trail running along the river through Center City toward South Street. It connects to the trails along Martin Luther King Jr. Drive and Kelly Drive, making it part of the Schuylkill River Trail system, which extends all the way to Valley Forge National Historical Park.

North of the Art Museum, the city’s Fairmount neighborhood is home to one of Philadelphia’s largest and most enduring community gardens, The Spring Gardens, which occupies an entire city block and serves dozens of families from all walks of life. Established with support and training from PHS, The Spring Gardens actively participates in the PHS City Harvest program, in which community gardeners grow produce for donation to underserved families. Farther north, the Eastern State Penitentiary Historic Site has a spectacular perennial garden along Fairmount Avenue. PHS works with a group of neighborhood volunteers who re-claimed the long-neglected garden and help maintain it today.

One of Philadelphia’s most fashionable residential and shopping districts, the Rittenhouse Square neighborhood is roughly bounded by Walnut and South Streets, 15th Street and 24th Street. At the neighborhood’s heart sits Rittenhouse Square, a thriving city park that hosts festivals, concerts, an annual art show, farmers market, and other events throughout the year. With its large mature trees, beautiful fountain, lawns, and benches, the park offers great people-watching and lovely vistas of this elegant neighborhood.

The Benjamin Rush Medicinal Plant Garden at the Mütter Museum of the College of Physicians, a renowned museum of medical history founded in 1863, is open to visitors with admission to the museum. It contains more than 60 varieties of medicinal plants arranged in four raised beds, or parterres. (Note: This garden is undergoing renovation and is scheduled to reopen in spring 2013; check collegeofphysicians.org/mutter-museum for updates.)

Southwest of Rittenhouse Square is the half-acre Fitler Square, surrounded by tree-lined streets and well-tended private gardens. The stately private homes along nearby Delancey Place and surrounding streets have some of the most beautiful gardens in the city, many of which are visible from the sidewalks. At the end of Delancey Place is Schuylkill River Park, where children will enjoy the Markward Playground and recreation center. The park features lawns and tree-lined walkways, a conversation area, and a community garden, as well as an extensive dog run, a baseball diamond, soccer field, and tennis and basketball courts.

South of City Hall along Broad Street, known as the Avenue of the Arts, look for attractive sidewalk planters—designed and maintained by PHS—filled with a seasonal mix of flowering trees, perennials, and annuals. At 11th and Pine streets, the tiny but well-loved Louis I. Kahn Park offers a green oasis with lush plantings and a soothing fountain. Its active community volunteer group runs an annual antique and craft fair as well as summer concerts.

On Lombard Street between 10th and 11th, Seger Park has an innovative new playground, tennis courts, a dog run, basketball courts, a recreation center and a planned “spray-ground” for summer fun. The Friends of Seger Park has received assistance from PHS as part of a network of neighborhood park groups.

The Physic Garden at Pennsylvania Hospital, the nation’s first hospital, was first proposed in 1774 but not completed until 1976, when it was the bicentennial project of the Philadelphia Committee of the Garden Club of America and the Friends of Pennsylvania Hospital. The lovely walled garden, along Pine Street near 8th Street, features plants commonly used for medicinal purposes in the eighteenth century, as well as dozens of mature trees and shrubs.

At 6th and Walnut streets, Washington Square—one of Philadelphia’s original squares—was once a city burial ground and holds the Tomb of the Unknown Soldier in memory of soldiers who fought in the American Revolution. Today Washington Square serves as a lush green commons surrounded by lovely homes and notable buildings, including the Philadelphia Athenaeum and the Curtis Center, where you’ll find a garden made of glass—Dream Garden, an enormous mosaic designed by artist Maxfield Parrish (1870-1966) and executed by the studio of Louis Comfort Tiffany.

The heart of Old City Philadelphia, rich with historic sites and landscapes, also offers tree-lined streets, pocket parks, and enclosed gardens. Be sure to see Christ Church Burial Ground, one of America’s most interesting Colonial and Revolution-era graveyards, featuring 1,400 markers on two beautiful landscaped acres in the heart of historic Philadelphia, on Arch Street between 4th and 5th streets. Some of America’s most prominent leaders rest here, including Benjamin Franklin and four other signers of the Declaration of Independence.

Another of Philadelphia’s five original squares, Franklin Square has been redesigned especially with children in mind. Located at 6th and Race streets, across from the National Constitution Center, Franklin Square was recently named one of the top five playgrounds in the United States by Yahoo.com. Attractions include the Philadelphia Park Liberty Carousel, a Philadelphia-themed miniature golf course, playgrounds, and the beautiful Franklin Square fountain.

Walking east to the end of Race Street, you’ll find one of Philadelphia’s most imaginative new green spaces. Race Street Pier features cutting-edge landscape design and connects downtown Philadelphia with the Delaware River waterfront. Its dramatic setting near the base of the Benjamin Franklin Bridge and spectacular views of both the river and city create an exciting yet intimate public space. Surrounded on three sides by water, the park includes an upper level “Sky Promenade” and a lower level with a “Sun Lawn,” planting beds, and seating. Plantings include grasses and perennials as well as more than three dozen trees cultivated in New Jersey for the World Trade Center Memorial in New York City. PHS helped lead an extensive community engagement project to develop the vision for Race Street Pier, and to inform further plans to re-connect Philadelphia with the Delaware River.