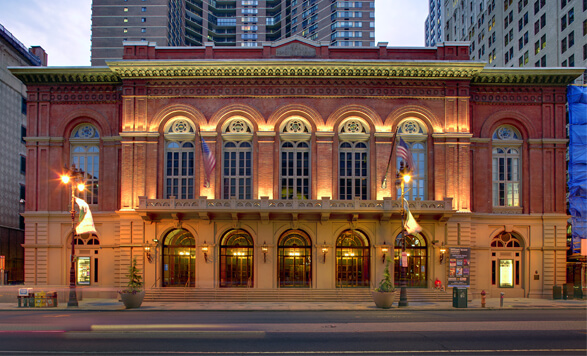 The Academy of Music, above, is the oldest operating concert hall in the nation. It's stop No. 13 in the tour, below.

Download this easy (and free!) architecture tour and see some of our city’s most stunning structures in a different light

1. Start your tour walking down Elfreth’s Alley (north of Arch Street on 2nd Street), a row of brick homes from the 1720s that form the oldest continually inhabited street in America.

2. From there, amble up and down 2nd and 3rd streets past myriad art galleries and restaurants at the bases of some Civil War-era and late-19th-century loft buildings.

3. Then stop at Christ Church (1744) and Burial Ground (1719) at 2nd and Market streets (open March to December), modeled after the work of British architect Sir Christopher Wren. Laid out symmetrically, this example of Georgian design was once named the tallest building in the colonies.

4. Walk south along 2nd Street to the Society Hill neighborhood (between South and Walnut streets), noteworthy for its 18th-century houses and marked by I.M. Pei’s trio of apartment towers (1964). Keep an eye out for the semicircular portico of William Strickland’s Merchant’s Exchange (1833) at 3rd and Walnut streets and Hill-Physick-KeithHouse (1786) and Powel House (1765) — two particularly grand examples of 18th-century Philadelphia town homes on 3rd and 4th streets.

5. At 4th Street, turn north toward Chestnut Street, where three beautiful Italianate banks are all that remain of a mid-19th-century concentration that once sat cheek by jowl like Renaissance palazzos.

6. Across the street on Chestnut Street, the Second Bank of the United States (1824), also designed by Strickland — the architect who most put a visual stamp on early Philadelphia — is a signature example of a Greek Revival public building.

7. Just north on 5th Street is the impressive Bourse (1895), clad in distinctive sandstone and featuring a light-filled atrium that once housed stock and trading exchanges.

8. Walk one block east on Chestnut Street toward Independence Hall and its companion,Carpenters’ Hall, the 18th-century home of the city’s builders’ guild. Both are outstanding examples of Georgian design, marked by dramatic cupolas and Palladian windows.

9. Exit Independence Square on the southwest diagonal of 6th and Walnut streets, towardWashington Square, one of William Penn’s original five squares. Walk through the park, noting the elegant row homes and apartment buildings surrounding it.

10. From there, it’s a short walk to 9th and Spruce streets and the Pennsylvania Hospital(1805), an example of the Federal style and worthy of the building’s status as the first hospital in the colonies.

11. Further west on Spruce Street (between 11th and 13th streets), you’ll encounter many alleys with names such as Camac, Irving and Quince. Tree-lined and covered in Belgian block and brick pavers, these charming residential streets are rich in “trinity” homes, three-story houses that are only one room deep.

STROLL THROUGH THE RITTENHOUSE SQUARE DISTRICT

12. Continue along Spruce Street to Broad Street, where the soaring glass vault of theKimmel Center for the Performing Arts (2001) by architect Rafael Vinoly offers a triumphant introduction to the Avenue of the Arts.

13. Walking north on Broad Street, you’ll see the red brick Academy of Music (1857), the oldest operating concert hall in the country, and

14. The Union League (1865) with a Second Empire mansard roof and monumental stairway.

15. Broad Street’s somber Girard Trust (1908) by McKim Mead & White offers Pantheon-like gravity and, in the form of a Ritz-Carlton Hotel, is a great place to stop for a cocktail.

16. Just ahead lies the dramatic clock tower of City Hall (1901), topped by an iconic statue of city founder William Penn. Until 1987, this was the tallest building in the city, and it is still the tallest load-bearing masonry structure in the world. City Hall also marks the center of downtown Philadelphia, with four major portals.

17. Exit through the eastern gateway to Market Street. Immediately on your right, you’ll spot the Italianate grandeur of Daniel Burnham’s granite-and-limestone John Wanamaker Building (1911), which Bender cites as an early example of a skyscraper (it’s only 12 stories) made from structural steel. Now a Macy’s department store, the building retains its stunning interior, best experienced near the shoe department’s soaring atrium.

STEP INTO THE CONVENTION CENTER DISTRICT

18. Continue east on Market Street to the PSFS Building (1932), a remarkably modern building by Howe & Lescaze that introduced the international style to America and is now aLoews Hotel.

19. “Instead of creating a style based on decoration and earlier motifs, the international style didn’t look back,” says Bender. “It focused entirely on the structure of the building.” Across the street, the old train shed at Reading Terminal (1893) was once the world’s largest single-span structure; it now serves as a ballroom for the Pennsylvania Convention Center and hosts a fantastic daily farmers’ market.

20. Head back to Broad Street and walk north towards the Pennsylvania Academy of the Fine Arts (1876), which represents the premier work of Frank Furness, Philadelphia’s famed architect. Furness uses flourishes such as gilded walls, pointed arches and floral ornaments in an extraordinary mash-up of architectural styles from Moorish to Gothic to high Victorian.

21. End your tour with modern marvels and head to 17th and Market streets to see One and Two Liberty Place (1990), two towers designed by Helmut Jahn, that are legendary for breaking the gentleman’s agreement to never build higher than City Hall. They also started a trend in town that Bender says has come to define the skyline. “Liberty Place was the first project in Philadelphia to use curtain walls of blue glass on the city’s tallest buildings,” he says.

22. The Comcast Center (2007) by Robert A.M. Stern (at 17th Street and John F. Kennedy Boulevard) also uses blue glass and now stands as the tallest building between New York City and Chicago (and one of the tallest LEED-certified buildings in the world). The center is a destination in its own right with “The Comcast Experience,” a free multimedia extravaganza in the Winter Garden Lobby with the largest 4mm LED screen in the world.