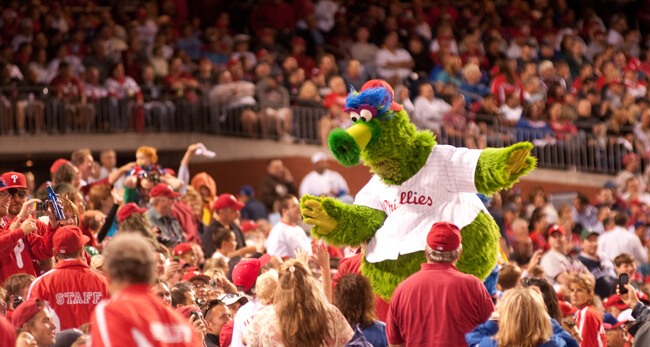 The Phillie Phanatic is one of the most recognizable mascots in all of sports — and just one of many reasons to enjoy a guys' gathering in Philadelphia.

Be a Man in PHL

Pro teams in every sport, major college sports, killer local brews and top-notch steakhouses — what more could you want?

Race to the Automotive Museum to see a collection of 60 rare race cars from 1909 to present day, all displayed in dioramas depicting the venues where they actually raced.

Then keep the competition alive by figuring out who has the best cheesesteaks in the city.

While you’re in the neighborhood, grab dinner at XFINITY Live!, or head to one of Philadelphia’s famous sports bars before checking out the city’s nightlife.

Step inside the world of 19th century medicine — and medical oddities — at the Mütter Museum, founded in 1858 to educate future doctors about anatomy and human medical anomalies. The one-of-a-kind collection includes the tallest skeleton on display in North America, a vast collection of skulls and the preserved cancerous growth removed from President Grover Cleveland.

Run the Rocky steps and see the sites where Philadelphia’s best-known movies were filmed on the Philadelphia in the Movies Film Tour. Hear about the filming of Transformers: Revenge of the Fallen, National Treasure, Philadelphia, Trading Places, The Sixth Sense and Witness and get a behind-the-scenes-view of upcoming hits.

Then dine at one of Philadelphia’s classic steakhouses.