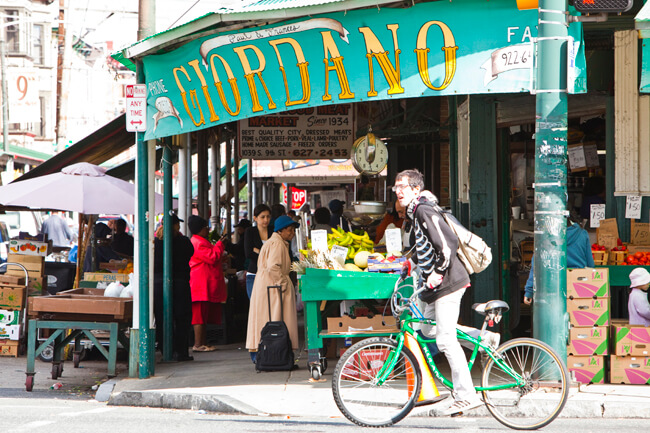 Philadelphia's Italian Market, pictured, is the oldest and largest working outdoor market in the United States. It's just one of many culinary treats for you to discover.

No trip to Philadelphia is complete without sampling some of the amazing food and drink options that the city has to offer. Philadelphia is known for its local flavors, including the cheesesteak, which was invented in the city in the early part of the 20th century. With so much more than melted cheese on a roll, Philadelphia is a melting pot of global cuisines with restaurants run by some of the most famous and sought-after culinary masters in the world. Here are some suggestions for gastronomical tours and treats in the City of Brotherly Love.

Chef Jacquie leads tours of the Italian Market, East Passyunk Avenue, and Chestnut Hill and also offers student and group tours. A South Philadelphia native, born and raised just two blocks from the Italian Market, the oldest and largest working outdoor market in the United States, Jacquie is a professional chef who grew up with most of the shop owners on 9th Street. Be sure to check out Fante’s for some new kitchen gadgets and Di Bruno Brothers “House of Cheese,” known for specialty cheeses, breads and prepared foods.

Learn the history of local food favorites like cheesesteaks, hoagies and pretzels and the Reading Terminal Market, at 12th and Arch Streets, during a 75-minute, food-writer-led walking tour. The public market opened in 1893 in the train shed of the Reading Railroad Company and is renowned for its international and local specialties – including Pennsylvania Dutch goodies. The marketplace is a great sampling of Philadelphia flavors with over 80 merchants selling food, groceries, gifts and more.

Philadelphia is known for an endless variety of creative food venues in every neighborhood.  Book early for a reservation at a renowned Philadelphia spot with food by some of the city’s award-winning chefs and restaurateurs including:

Be sure to take advantage of the many Philadelphia BYOB restaurants, where you bring the wine and they supply the food!