YOUR GUIDE TO THE 2022 ARMY-NAVY GAME PRESENTED BY USAA 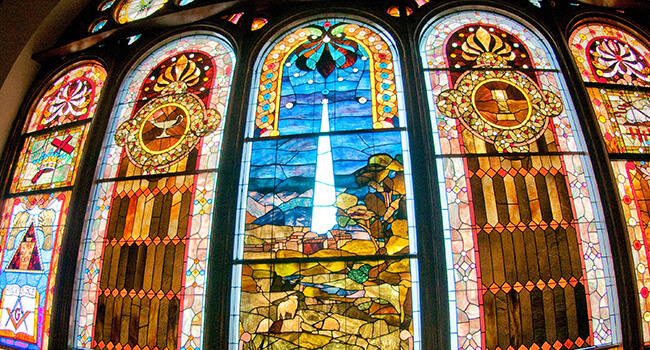 Philadelphia's religious history dates back to its founding and includes Mount Bethel AME Church, above, the oldest piece of U.S. property continuously owned by African Americans.

Within just one small section of Philadelphia, you can find a Catholic church, Presbyterian church, the oldest AME church in the country and the nation’s oldest synagogue, all tangible examples of William Penn’s visions for a haven of religious freedom.


Visit Christ Church and Burial Ground, known as “The Nation’s Church” because of the famous revolutionary leaders that worshipped here: George Washington, Betsy Ross, and Benjamin Franklin, whose final resting place is in the church’s burial ground, one of America’s most historical Colonial and Revolutionary-era graveyards.

Just a few blocks away, visit one of the nation’s oldest synagogues, Mikveh Israel. This congregation started in the 1740s, and has a strong relationship with Christ Church. During the 1870s, when Mikveh Israel’s synagogue burned, Christ Church contributed funds to construct a new building, and the congregations still have a joint dinner once a year.


Enjoy a sit-down lunch at one of our many restaurants and outdoor cafes in the Old City neighborhood, such as the Bourse Building. The Bourse was the first building in the world to simultaneously house a stock exchange, maritime exchange, and a grain-trading center. For those with a sweet tooth, head to The Franklin Fountain for dessert.

After lunch, walk over to Mother Bethel A.M.E. church, one of the oldest of its kind in the country, and one of the oldest pieces of property continuously owned by African Americans. Founded by Richard Allen in 1792, the building houses a museum on the lower level, which includes 19th-century artifacts and archives that contain original copies of The Christian Recorder, a newspaper that began publishing before the Civil War.

Visit the National Shrine of Saint John Neumann. Proclaimed “the priest of the working class,” his shrine at the beautiful St. Peter the Apostle Church is a wonderful tribute to his life. As the Bishop of Philadelphia, Neumann helped build 90 churches and 40 schools, organized the first diocesan schedule of the Forty Hours’ Devotion in America and founded the Glen Riddle Sisters of the Third Order of St. Francis.


Explore the Saint Rita of Cascia National Shrine, built in 1907 by the Augustinian Friars to honor her life of charity and devotion. Rita entered the convent in Cascia, where she lived a life of devout faith and charity. Pope Leo XIII canonized her on May 24, 1900.

Visit the Arch Street Meeting House, the largest Quaker meeting house in the United States, to see how the Quaker ideals of simplicity and equality were designed into its construction. The building symbolizes William Penn’s Holy Experiment: religious freedom, rule of law, pluralism and diversity, and respect for human rights and personal liberties. Here you can also learn about the Quakers influence on Thomas Jefferson, Benjamin Franklin, and the birth of our nation. Located a few blocks from the Meeting House is the Bishop White House, which dates back to 1786. This was the home of Bishop William White and his family while he served as the rector of Christ Church and St. Peter’s Episcopal Church.