Shopping is anything but taxing in Philadelphia 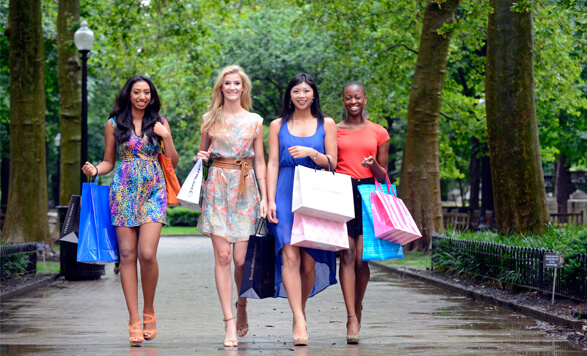 Philadelphia offers some exceptional cultural, dining, recreational and historic experiences. But for shoppers, the city is a haven for everyone from small boutique-seekers and antique aficionados, to outlet lovers and mall-goers. As a bonus, every shopper benefits from tax-free apparel and shoes.

Check out the highlighte below, and get a closer look in our interactive shopping guide.

The Shops at Liberty Place offers a one-of-a-kind shopping experience with a large variety of choices such as J. Crew, Aveda, and, Nine West, all under a soaring glass rotunda. Known as “The Grand Dame of Broad Street,” The Bellevue opened in 1904 as a magnificent hotel and now boasts the spectacular Shops at The Bellevue, featuring Polo Ralph Lauren, Williams-Sonoma, and Nicole Miller, among others, all in a historic setting.

Listed in the National Register of Historic Places, The Bourse Food Court & Specialty Shops, an architectural masterpiece, features a variety of retail shops and is a great place to pick up some souvenirs.

The Best Deals in Town

Macy’s, located in the former John Wanamaker building between Chestnut and Market streets just past Broad Street, features a special visitors center where international visitors can obtain a special International Savings Card good for 10 percent off all Macy’s purchases.

Also be sure to check out our Deals section, which is updated regularly, at www.discoverPHL.com/deals.

For the chic, Rittenhouse Row is the place to shop with more than 200 upscale dining, retail, and cultural establishments, all within one of the nation’s most exclusive shopping neighborhoods, all centered around picturesque Rittenhouse Square. Stretching from the Avenue of the Arts (Broad Street) to 21st Street, between Spruce and Market streets, Rittenhouse Row is brimming with art galleries, haute couture boutiques, local and national retailers, and specialty stores. From the custom fashions of Boyd’s, a men’s and women’s designer clothier, to Lagos, where jewelry designer Stephen Lagos began his locally based business—Rittenhouse Row boasts some of Philadelphia’s finest shops. The neighborhood is also home to Urban Outfitters, a retail chain known for its edgy fashions and furnishings and Anthropologie, a women’s clothing, accessories and home décor shop. Both stores were started in Philadelphia, and from their humble beginnings in 1970, Urban Outfitters has grown into a multi-billion dollar retail chain with its international headquarters at the Philadelphia Naval Business Center.

For the gourmand, Philadelphia and its surrounding areas are among the nation’s premier regions of farming and agriculture. From Kennett Square mushrooms and Branch Creek Farm’s organic milk and cheeses, to Lancaster’s Amish produce and baked goods, Philadelphia is a food-lover’s heaven. Reading Terminal Market, located on the street level of the Pennsylvania Convention Center, is a gastronomic bazaar in a historic setting that dates back to the 19th Century. Many of the historic market stands are still filled with local produce, fresh eggs, milk, meats, poultry, seafood, handmade crafts, jewelry, and clothing. The Market is home to more than 80 merchants, two of whom are descendants of the original stand-holders from a century before. On any given day one can find an eclectic array of fresh baked Amish goods, produce direct from the field, unusual spices, free range meats and poultry, flowers, ethnic foods, and much more.

A mile south of City Hall, the Ninth Street Italian Market is the oldest and largest working outdoor market in the United States. The Market, which spans the length of 9th Street from Fitzwater St. to Wharton St., has not changed much in nearly 100 years. Still predominantly Italian, it has the best of many cultures and cuisines to offer shoppers. While food enthusiasts explore the depth and breadth of the gourmet offerings, all visitors to the Italian Market are transported by the sights, sounds, and smells of a bygone era.

Appreciation for quality foods goes beyond the Reading Terminal and Italian Market, as demonstrated by Center City’s Garces Trading Company and Di Brunos. These two local treasures affordably offer an ample assortment of artisanal breads, cheeses, meats, jams and delicacies, making them perfect for a quick lunch or a relaxing picnic in Washington or Rittenhouse Square.

For those looking for a specific item, or perhaps a one-of-a-kind object d’art, the city has many enclaves of artisans and specialty shops. Located on Sansom Street, between Seventh and Eighth streets, and on Eighth Street between Chestnut and Walnut streets, Jewelers’ Row is the oldest diamond district in America, and only second in size to the row in New York City. It also features the longest continuously operating jewelry shop, which dates back to 1851, and a total of more than 300 retailers, wholesalers, and craftsmen. Many of the businesses on Jewelers’ Row have been owned by the same families for five generations.

The Northern Liberties neighborhood, located north of Old City between Girard Avenue and Callowhill Street, from the Delaware River to Sixth Street, offers a burgeoning area of bohemian shops and interesting boutiques. Everything from home furnishings, vintage clothing, high-end skin care products, and more are on display in this unique, “industrial chic” neighborhood.

Just west of Center City, in the shadow of the University of Pennsylvania, is University Square where there are vibrant outdoor shopping plazas surrounding the corner of 36th and Walnut streets. In addition, there is a Farmer’s Market every Wednesday from 10 a.m. to 2 p.m. (May-November), live music every Thursday evening, and a variety of hip international, national, and local shops selling items such as rare books or records that offer warm memories of the past, present and the future.

The Hippest Streets in Town

The very best in the eclectic, urban, and hip can be found in the South Street and Old City areas. Both areas feature a diverse combination of visitors and residents, and an eclectic mix of more than 300 shops and more than 60 eateries, cafes, and bars. South Street, between Front and 7th streets, is known for its outdoor buzz and bohemian residents. The South Street Antiques Market is one of the area’s best kept secrets. Discreetly housed inside a historic building that was once used as a synagogue, the Antiques Market is comprised of several unique vendors peddling everything from hand-picked vintage clothing and classic eyewear to rare toys and books. Most stores on South Street are independently owned and stay open long after the city’s other retail establishments have closed for the night, adding a decidedly nocturnal flair to ‘the hippest street in town.’

In Old City, located between Front and 4th streets and Race to Chestnut streets, countless galleries, home décor shops, bookstores, and new and vintage clothing boutiques line the historic cobblestone streets. Visitors can first peruse contemporary paintings, sculptures, and quilts at Artjaz Gallery on 2nd street, and then choose from a multitude of dining options on Chestnut street. In addition, on the first Friday of every month, the area’s galleries and stores are open late and vendors line the streets with their local crafts, while the curious browse and purchase. Street musicians often add even more color to the lively scene.

Get Out of Town

Visitors can take a break from Center City’s extensive shopping experience, and make the short trip to one of the numerous historic and quaint shopping destinations in close proximity to Central Philadelphia. The Chestnut Hill area, which is only 20 minutes from Center City, houses more than 100 boutique shops, cafes, and restaurants in a charming urban village setting. Historic Manayunk, only seven miles north of Center City, is known for its hills and history and has a dynamic Main Street lined with unique boutiques, galleries, and restaurants bordered by a scenic canal and towpath.

Another popular shopping destination just outside the city, The King of Prussia Mall, is the largest shopping complex on the East Coast, and offers the most discriminating shopper an endless selection of luxury department stores with more than 400 dining and shopping venues. Philadelphia Premium Outlets, located in the northwestern suburb of Limerick, offers 150 brand name outlet stores from designer fashions and sportswear to home furnishings and specialty gifts, all at 25-66 percent off everyday prices.