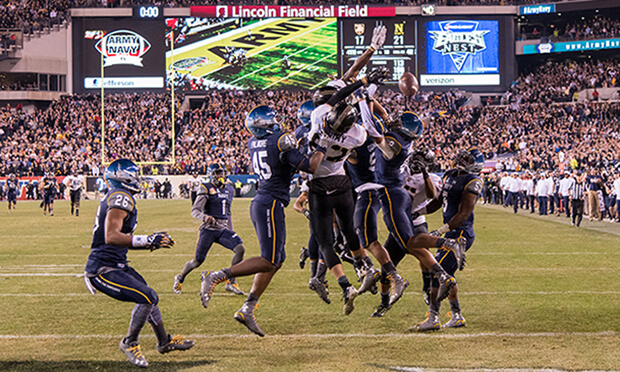 On a gorgeous Saturday in December in front of yet another sold-out crowd at Lincoln Financial Field, Navy edged Army, 21-17, for its 14th straight victory, continuing the longest win streak in the rivalry’s storied history.

The game remains as popular as ever, as evidenced by the 7 million viewers tuned in to the CBS broadcast from around the country. The game earned its highest television rating in 19 years (5.1 /12 share), ranking as one of the Top 10 college football regular season broadcasts of 2015.

All told, more than 50,000 visitors were estimated to be in town for the game, generating more than 30,000 hotel room nights, according to a recent study.

“It’s the home of Army-Navy. Philadelphia is a well-oiled machine that sets the bar. They’re the benchmark that every city that aspires to conduct an Army-Navy event is measured … They’ve been doing it so long now they have it down to a science.”

The annual contest goes to Baltimore this year before returning to Philadelphia in 2017.