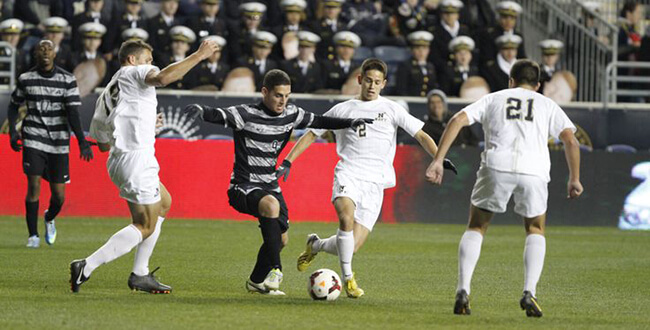 For the fourth year, the Army and Navy men’s soccer teams will square off in what is sure to be another nail-biter at PPL Park.

The game was postponed until Tuesday, November 3, at 7 p.m. due to high winds and heavy rains on the original October date.

In 2014, Navy won in double overtime in front of more than 10,000 fans. The crowd ranked as the third-highest-attended NCAA match in the country last season.

“We continue to look forward to another installment in this great rivalry,” Army West Point Director of Athletics Boo Corrigan said. “This matchup has become one of the premier events of the college soccer season, and we’re excited to watch it continue to grow.”

“The game may be delayed, but it will only enhance the anticipation for what always proves to be as fine a competitive setting as there is in college soccer,” Navy Director of Athletics Chet Gladchuk said.

Tickets are still available, so come be a part of the rivalry and excitement of the Army-Navy Cup.  Learn more and buy your tickets here.