Historic Franklin Field Gets a Facelift 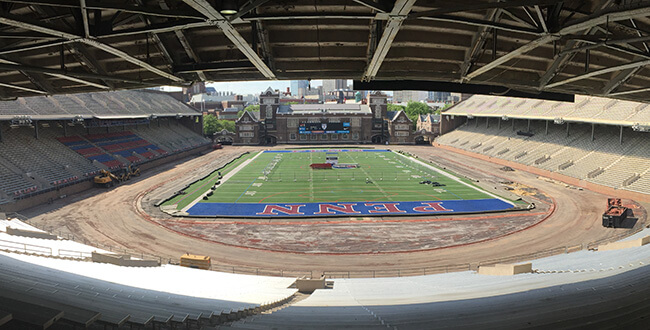 The $3 million renovation to Franklin Field’s track that Penn officially unveiled on Thursday is more than just cosmetic. It includes a few subtle but substantive changes that have opened up the possibility of bringing more national and international track meets to 33rd Street beyond the annual Penn Relays carnival.

The biggest is the addition of a sixth lane with a standard-size stagger within the nine-lane layout.For years, Franklin Field’s stature in the track world has been defined by two key traits: the huge crowds that flock to the Relays and the bigger-than-standard stagger of the inside lanes’ turns. That stagger is required to ensure that all runners cover the same distance as they race.

The quirk of Franklin Field’s stagger dates to 1951, when Penn first expanded the track to nine lanes. Because of the brick wall that separates the track from the stands, the university built the new lanes inside the old ones instead of outside them.

This summer’s renovation – which uncovered decades-old cinders from the original track along the way – included a complete removal of the previous surface. When the new surface was designed and installed, planners found they could fit in the sixth regulation-size lane. So the lanes labeled four through nine now meet the standard.

It so happens that the six-lane setup is also used in Stockholm’s Olympic Stadium, which annually hosts a prestigious International Association of Athletics Federations Diamond League meet. Like Franklin Field, the 103-year-old venue had its additional lanes built inward to preserve historic features.

And that has Penn Relays director Dave Johnson dreaming of bringing a Diamond League meet to Philadelphia. He and his colleagues in Penn’s athletic department have also considered bidding to host a USA Track and Field national championship or a NCAA outdoor championship.

“There is definitely” the desire, Johnson said. “The question is, how far up the ladder can you go? … They [in Stockholm] are constrained in the same way we are by the wall that is the ‘front porch’ of the grandstand.”

Johnson knows his case will not be easy to make. Penn hasn’t hosted the NCAA’s meet since 1976, and the track-mad University of Oregon is in the midst of a six-year hosting stretch that runs until 2018. But given the diminishing interest in track and field among American sports fans, bringing the event to a city that always embraces big college events would offer a boost in exposure.

As for USATF, it has never brought its signature meet to Philadelphia – and hasn’t even brought it to the East Coast since the now-demolished Downing Stadium on New York’s Randall’s Island hosted in 1991. Franklin Field’s last major professional-level event was the 1980 Liberty Bell Classic, which featured runners from the United States and other nations that boycotted that year’s Olympics in Moscow.

“It would not be an easy sell, because we have a synthetic infield,” Johnson said, referring to the SprinTurf surface on which Penn’s football team plays. “You have to bid for those events, and you have standard facilities that are in the bidding process. We’re going to have to come up with something particularly special to win hearts and minds and have a major championship event in here.”

But Johnson knows he brings a few assets to the table. First and foremost is the huge Relays crowd, with its colorful mix of Jamaican and American fans. Compare that to Downing Stadium’s successor on Randall’s Island, Icahn Stadium, which seats just 5,000 fans.

Franklin Field is also easily accessible by a range of public transit means, including Amtrak and SEPTA. Icahn is renowned for the logistical hassles fans face in crossing the East River from Manhattan.

When measured against Eugene, Philadelphia doesn’t bring the reputation of being a track hotbed. But Eugene can’t bring the kind of big-city exposure that the nation’s fourth-largest television market has.

“That would be, certainly, one of the selling points that would be pitched to both the NCAA and USA Track and Field,” Johnson said.

And if needed, Johnson can call on a few allies who have deep connections in both the Penn and track communities.

One is IAAF senior vice president Bob Hersh, a longtime Relays fixture. He used to work as a public address announcer at the event, and now sits anonymously among the small army of timers, scorers and stat-keepers on press row.

Another is David Cohen, chair of Penn’s board of trustees and a Comcast senior executive vice president. His company owns NBC, which has high-profile broadcast deals with the Olympics, IAAF and USATF.

Johnson wouldn’t be drawn on whether a Diamond League event at Franklin Field would supplement New York’s or perhaps serve as a one-time substitute. But whenever it happens, it shouldn’t be a problem for Penn logistically. The Diamond League calendar runs from May through September, so a Franklin Field meet would be well after the Relays.

In addition to the additional lane on the track, the renovations brought a few changes worth noting. Of particular consequence for Relays fans is that the steeplechase pit has been moved from the northeast corner of the track to the southwest, over by the visiting football team locker room.

That will, unfortunately, bring an end to the Relays tradition of fans gathering at the curve by the pit to cheer on runners as they land in the water. Now you’ll have to go to the stands in the opposite corner, or hope you can stand on the plaza under the scoreboard.

Johnson noted, though, that the move brings Franklin Field in line with the international standard for where the water pit should be relative to a track’s finish line. For all those years, despite the great spectacle, the layout was not as it should have been.

The long-jump and triple-jump areas on the south side of the track have new and longer runways, which will benefit competitors. And on the north side, the pole vault area has been reconfigured so that jumpers can approach the bar from either end of the stadium depending on wind direction. Previously, the space was configured so that jumpers could approach only from one end.