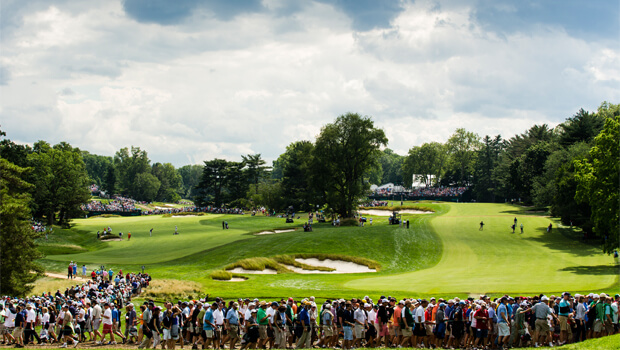 The 2018 BMW Championship is heading to legendary Aronimink Golf Club outside Philadelphia.  The BMW Championship is the penultimate event in the PGA TOUR FedExCup Playoffs and boasts a field of the TOUR’s top 70 players vying to earn one of 30 spots in the season-ending TOUR Championship for the chance to be crowned FedExCup champion.

Since its founding in 1896, Aronimink has hosted the PGA Championship, the Senior PGA Championship and the U.S. Amateur.  Aronimink’s Donald Ross-designed course is consistently rated one of the finest and most challenging in the United States. Aronimink last hosted a PGA Tour event in 2010 and 2011, when Tiger Woods’ AT&T National was held to rave reviews.  PGA Tour commissioner Tim Finchem called Philadelphia “one of America’s great sports cities” and said Aronimink would “continue the trend” of excellent courses that have hosted the tournament.

Other major golf events also coming to the area include the 2015 PGA Professional National Championship heading to historic Philadelphia Cricket Club June 28-July 1.  The Championship’s 312-player field represents 41 PGA Sections, with its 20 top finishers earning a berth in the PGA Championship.  More information can be found at www.pga.com

And some of the world’s top women’s amateur golfers will be represented during the 2016 U.S. Women’s Amateur Championship at Rolling Green Golf Club in Springfield, Pa.  The championship will take place August 8-14, 2016.  For more information please visit http://www.usga.org/