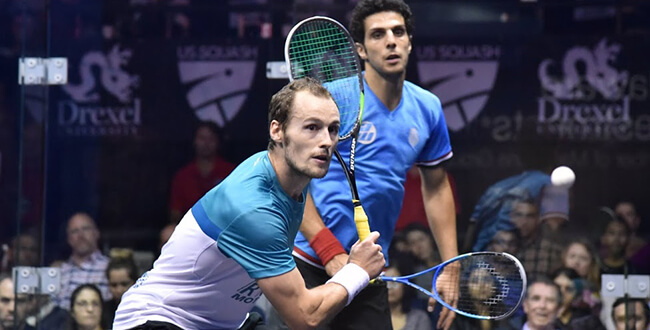 The Delaware Investments U.S. Open Squash Championships, the most prestigious squash tournament in the United States, returned to Drexel University in October.

For the fifth straight year, Drexel’s Daskalakis Center was transformed into a world-class squash venue and welcomed the best players from around the globe.

Excellent crowds saw Gregory Gaultier secure his third career U.S. Open title, defeating first-time world series finalist Omar Mosaad in a three-game final. Laura Massaro also claimed her second U.S. Open title as she came from two-one down to beat Nour El Tayeb in a thrilling women’s final. Prize money has now grown to $300,000, and the event is signed on to remain at Drexel through at least 2023.

US SQUASH also hosted the first-ever Squash Summit, an industry conference focused on the business side of the sport. US Squash President and CEO Kevin Klipstein said: “We have seen immense growth in our industry … we see great value in bringing the community together to share best practices and learn.”

Participants in the Summit included Lisa Baird, chief marketing officer from the U.S. Olympic Committee (USOC). Alicia McConnell, director of Training Sites and Community Partners at the USOC, also was in attendance to receive the President’s Cup from US Squash as one of the sport’s legendary players.