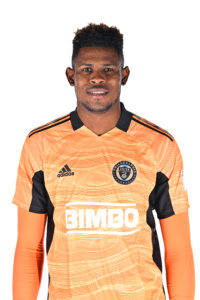 Blake, who currently leads the league in most goalkeeping categories, is a four-time MLS All-Star, two-time MLS Goalkeeper of the Year and has been nominated twice for an ESPY award for best Major League Soccer player. Thanks in large part to his efforts, the Philadelphia Union has been steadily holding first place in the Eastern Conference this season and is again in contention for the MLS Supporters’ Shield, awarded to the team with the best regular season record.

“I am grateful to be recognized by the Philadelphia sports community and honored to accept the Wanamaker Award on behalf of my family, teammates and the entire Philadelphia Union organization,” said Blake. “Throughout my career, I have strived to set an example on and off the field of what it means to be a strong leader and community advocate. I hope that I’ve inspired the future generation of young athletes to work hard and keep chasing their dreams.”

View and download a reaction video of Blake learning of his John Wanamaker Athletic Award win here. Video courtesy of the Philadelphia Union.

“It is our privilege to recognize Andre Blake as the recipient of the 2022 John Wanamaker Athletic Award for his commitment to the City of Philadelphia, his teammates and the game of soccer,” said Don Smolenski, Philadelphia Eagles president and PHL Sports chair. “It is also an honor to celebrate the contributions of Dr. Nikki Franke with the David P. Montgomery Lifetime Achievement Award, Coach Cliff Smith with the Sports Volunteer of the Year Award and the Anderson Monarchs with the Robert P. Levy Community Service award. All of the award recipients have proudly served and represented Philadelphia. We thank them for their dedication and look forward to honoring their legacies on October 26.”

The David P. Montgomery Lifetime Achievement Award will be presented to Dr. Nikki Franke, who retired this summer after 50 years as head coach of the Temple University fencing team. She is a two-time Olympian and the first Black woman to coach an NCAA Division I fencing team. During her incredible tenure, Franke became the university’s all-time winningest women’s athletic coach.

The Anderson Monarchs, a sports-based youth development organization in South Philadelphia, has been named the 2022 Robert P. Levy Community Service Award winner. Their programs provide athletic and educational opportunities to thousands of youths who are under-resourced in Philadelphia.

The awards presentation and luncheon will take place Wednesday, October 26 at the Crystal Tea Room. The John Wanamaker Athletic Award is presented each year by PHL Sports, the City of Philadelphia, The Wanamaker Building, The Philadelphia Inquirer and CBS3. Learn more here.

PHL Sports, a business development division of the Philadelphia Convention and Visitors Bureau, seeks to attract major sporting events and conventions to the Philadelphia area. PHL Sports, working in conjunction with the City of Philadelphia, the city’s professional teams and universities, has attracted many events to the city and is currently working on bids for future sporting events. To learn more, visit www.DiscoverPHL.com/sports.