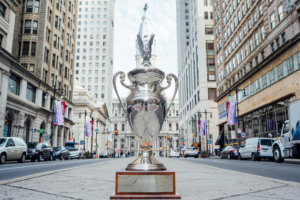 Lloyd has had a remarkable professional career spanning nearly two decades, ending with her retirement this past fall. The South Jersey native’s highlights include scoring gold medal-winning goals in the 2008 and 2012 Summer Olympics and leading the United States national team to two FIFA Women’s World Cup™ championships. In addition to her professional career, Lloyd hosts soccer clinics to develop young players’ skills with an emphasis on values. She also serves as honorary co-chair of Philadelphia Soccer 2026, the city’s FIFA World Cup 2026™ bid committee.

“I am honored to be recognized by the Wanamaker Award committee and the Philadelphia sports community with this award,” said Lloyd. “I hope my career will inspire young female athletes in the region to work hard to achieve their dreams and grow into the next generation of Olympic champions.”

The 2021 Robert P. Levy Community Service Award winner, Cloud is honored for her fight for racial justice, taking the 2020 season off to focus on these efforts. Cloud has used her platform to support the Black Lives Matter movement and spearhead efforts to convert the Mystics’ arena into one of the largest voting centers in Washington, D.C. for the 2020 presidential election.

After being drafted in 2015 by the Mystics, she went on to help the team win the WNBA championship in 2019. Prior to her professional career, Cloud played for Saint Joseph’s University, where she was named to the Atlantic 10 All-Conference First Team, and Cardinal O’Hara High School in Broomall.

“Carli and Natasha are not only world-class athletes, but they are also tremendous community ambassadors and advocates,” said Don Smolenski, president of the Philadelphia Eagles and chair of PHL Sports. “On behalf of PHL Sports, we are honored to recognize them both for their inspirational accomplishments.”

The public participated in the nomination process via online balloting during September 2021. The Wanamaker Selection Committee, consisting of a cross-section of sports and media representatives, made the final decision in recent weeks. Due to the COVID-19 pandemic, Lloyd and Cloud will be honored as part of the 2022 ceremony in the Wanamaker Building’s Crystal Tea Room. Learn more about the Wanamaker Award here.