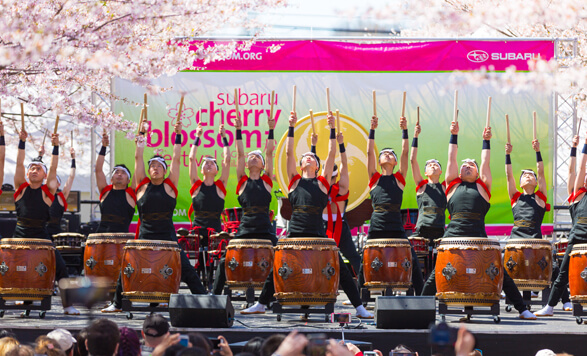 The City of Brotherly Love is the perfect destination to visit year-round. Below is a seasonal guide to Philadelphia’s best events.

Watch this annual Philadelphia tradition as the charismatic Mummers strut along Broad Street, celebrating the New Year. The colorful and extravagant costumes and performances are judged at the Fancy Brigade Finale at the Pennsylvania Convention Center.

Celebrate the Chinese New Year with an authentic dragon parade and enjoy traditional food and festivities in Philadelphia’s Chinatown. Check out our Year of the Pig itinerary for ways to celebrate.

Hundreds of vehicles, showcasing the latest models and trends, are on display at the Pennsylvania Convention Center.

This year, the largest U. S. flower show will celebrate the calming, restorative influence of flowers upon humanity with “Flower Power,” which will celebrate the contribution of flowers to our lives and will play host to the Florists’ Transworld Delivery (FTD) World Cup, the world’s most prestigious floral design competition.

Celebrate spring and Philadelphia’s rich cultural connection to the art, music, food and beauty of Japan with this festival that culminates in Sakura Sunday at the Horticulture Center in Fairmount Park.

Philadelphia Science Festival
April 26 through May 4, 2019

This family festival for all ages, presented by the Franklin Institute, celebrates science with informal lectures, exhibitions and hands-on activities throughout the city.

Watch high school, college and masters-level track stars as well as Olympic athletes compete in the oldest and largest track and field competition in the U.S. at Franklin Field on the University of Pennsylvania campus.

This 10-mile race along historic Broad Street has attracted local and international athletes for more than 35 years.

Head to the banks of the beautiful Schuylkill River for this annual collegiate regatta, which draws participants from more than 100 North American colleges and universities.

Longwood Gardens Festival of Fountains
May 9 through September 29, 2019

Daily performances at the Main Fountain Garden are set to music with water jets shooting 175 feet into the air.

Take part in this annual tradition where delicious Italian favorites, both sweet and savory, are available along with great music, shopping and more.

This festival gives you the chance to try locally made brews and participate in beer tours, prix fixe beer-pairing dinners, pub crawls and hundreds of events in restaurants and bars across America’s Best Beer Drinking City.

An exciting music festival curated by Jay-Z and featuring 60 artists on three stages on the Benjamin Franklin Parkway.

More than 1,000 experimental performances take over neighborhoods throughout the city during this annual arts festival. Performances include theater, dance, comedy, visual arts, spoken word and more.

Terror Behind the Walls, Eastern State Penitentiary
September through November

Consistently ranked as one of the top 10 haunted attractions in the country, this massive haunted house in historic Eastern State Penitentiary consists of six terrifying experiences within the prison grounds, including Lock Down, Infirmary, Machine Shop, Break Out, Quarantine 4D and the new Blood Yard.

Get an insider’s view of Philadelphia’s thriving creative industry at work with exhibitions, design events, lectures and more during the Philadelphia Center for Architecture’s annual festival.

Hundreds of paddlers gather to race down the scenic Schuylkill River in this 2,000-year-old tradition that involves beautiful boats, drumming and more.

Outfest celebrates “National Coming Out Day” with the largest event of its kind in Philadelphia’s Gayborhood.

The Philadelphia Film Festival is a world-renowned annual event premiering everything from Oscar contenders to breakthrough local films. Various locations.

The Philadelphia Marathon is one of the fastest courses in the country and a great way to see America’s Historic Mile while making some history of your own.

For more than 95 years, Philadelphia has kicked off the holiday season with this family-friendly parade along the Benjamin Franklin Parkway featuring giant floats, balloons and marching bands from across the country.

Philadelphia continues the tradition of two sets of fireworks on New Year’s Eve at 6 p.m. and midnight over the Delaware River. Launched from barges in the river, the fireworks are choreographed to unique soundtracks that can be heard from Penn’s Landing.

Philadelphia is a wonderful place to visit during the winter holidays. See our holiday guide for inspiration!